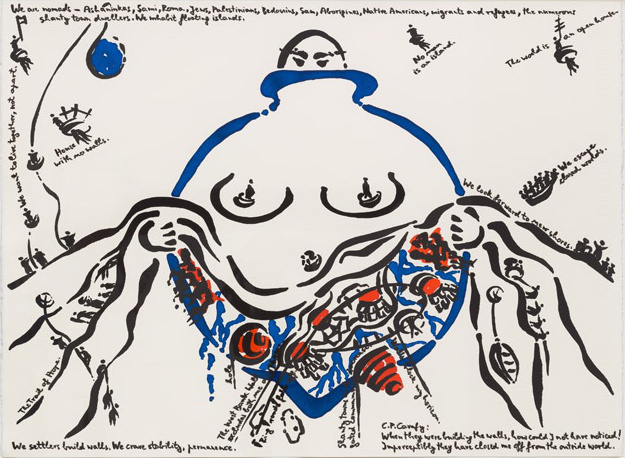 Marjetica Potrč in an artist and architect based in Ljubljana and Berlin. Through architectural case studies and socially-influenced sculptural installations, her work explores how we live, share resources and coexist alongside one another. Responding to the theme of Shelter, her installation in VISUAL creates a hybrid house structure which contrasts the architecture of two very different societies, one open and one closed. These are accompanied by a series of large-scale wall drawings, plus work stations set up for printing and for clay-making. Through the course of the season, Potrč invites groups and communities to use the space and add their contributions to the exhibition, thinking of how and where their community finds shelter together.

If your group would like to come in and use the gallery space during the season, please contact galleries@visualcarlow.ie

This exhibition is programmed and funded in collaboration with Carlow County Council Arts Office.

Marjetica Potrč‘s work has been exhibited extensively throughout Europe and the Americas, including in such major exhibitions as the Venice Biennial (1993, 2003, 2009), the São Paulo Biennial (1996, 2006), and Skulptur: Projekte in Münster, Germany (1997). Among her important exhibitions are shows at the Guggenheim Museum in New York (2001), the List Visual Arts Center at the Massachusetts Institute of Technology (2004), the De Appel Foundation for Contemporary Art in Amsterdam (2004), the Portikus Gallery in Frankfurt am Main (2006), The Curve at the Barbican Art Galleries in London (2007), the Max Protetch Gallery in New York (2008), the Nicolas Krupp Contemporary Art in Basel (2012), the Hamburger Bahnhof – Museum for Contemporary Art Berlin (2013, 2018), the PAMM Perez Art Museum Miami (2015), the Kunsthall Trondheim (2017), and the FLORA ars+natura in Bogota (2017).

This workshop aims to bring together a diverse group of people developing creative social environments and situations including community groups, urban planners, artists and architects. The event will be coordinated in a world café style, facilitating a range of conversations and interests. Lunch time food will be a Breadfellows’ meal by staff and artist-in-residence at VISUAL Clare Breen. Breadfellows’ Chats is a practice of collaboratively making ceramics and using them to share food. It foregrounds talking, making together and sharing food, as intimate gestures of care.