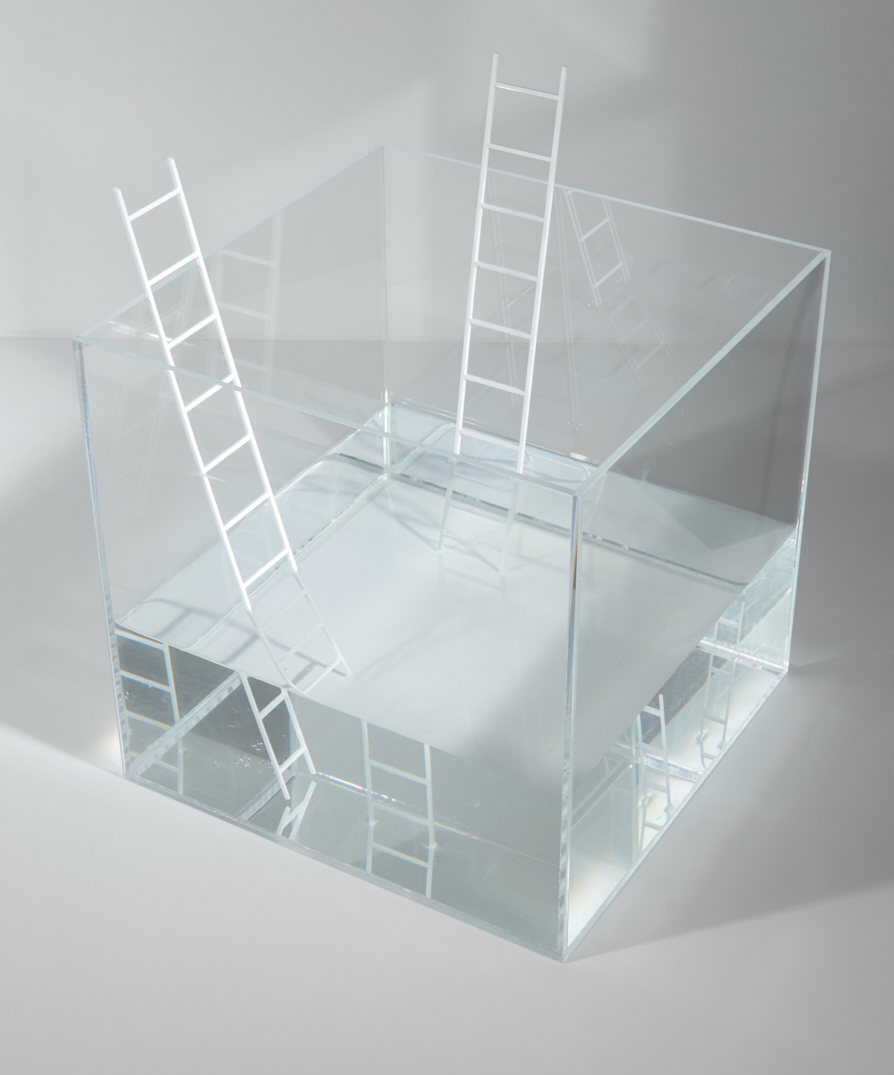 To mark the opening of the exhibition, artist Marie Hanlon and artist and writer Sara Baume will informally discuss the exhibition at 12 noon on Saturday 8 January 2022. The event is now fully booked, however the video of the event will be put up on our YouTube channel.

With world population predicted to reach 9.7 billion by mid-century, demands on water may surpass available supply. Earth’s water is finite, it is unevenly distributed and unequally shared. Radioactive contamination from fracking is reducing water reserves; climate change is bringing extremes of flooding and drought, and nature’s water cycle is under pressure – yet we remain unperturbed about water.

When Water Becomes Explosive draws attention to processes of fossil fuel extraction where water at high pressure is used to explode rock deep in the earth. The artwork’s nine-squared structure is appropriated from an American ball game called ‘9 Square in the Air’. Vertical and horizontal tubes reference extractive drilling and the artwork highlights the dominance of the oil industry, especially in America. Oil is prized while water is rendered toxic; but might the value of these substances reverse over time?

Water Table presents seven water tanks with levels in each ranging from full at one end, to empty at the other. The piece addresses fluctuations in rainfall experienced across the globe. An accompanying soundwork by composer Rhona Clarke generates aural images; heavy rainfall reduces to a trickle, followed by evocations of dry, parched and waterless places.

Other works in the exhibition deal with flooding and water treatment, with recycled wastewater a future possibility in Ireland. A research piece on desalination is combined with a small artwork in the form of a silver bullet with a capsule of desalinated water from the Irish Sea, and Rising Water juxtaposes a video on flooding with a sculptural work, which taken together convey the destructiveness yet perverse beauty of floods.

Marie Hanlon is an Irish artist working in sculpture, installation, video and drawing. She holds an MA in Art in the Contemporary World from the School of Visual Culture NCAD, Dublin and a BA in English and Art History from University College, Dublin. In recent years she has produced several collaborative projects with Irish composers, notably with Rhona Clarke. Her work has been exhibited and screened widely in Ireland and internationally. In 2015 Marie Hanlon was elected to Aosdána – the official body of cultural producers in Ireland.

“My work explores perception in relation to the familiar, it takes that which is commonplace or no longer engaging and reinvests it as a place of attention. Small interventions or modes of presentation exploit aspects of selected objects, places and materials. The idea is to slow down the act of looking, to elicit engagement by adjusting the familiar. In a society which competes ever more loudly for our attention, the human response is often to ‘tune out’ or to succumb to automatic responses. Through intrigue, play and the unexpected, I wish to re-engage attentiveness, especially around materials and things which we believe we already know.” Marie Hanlon