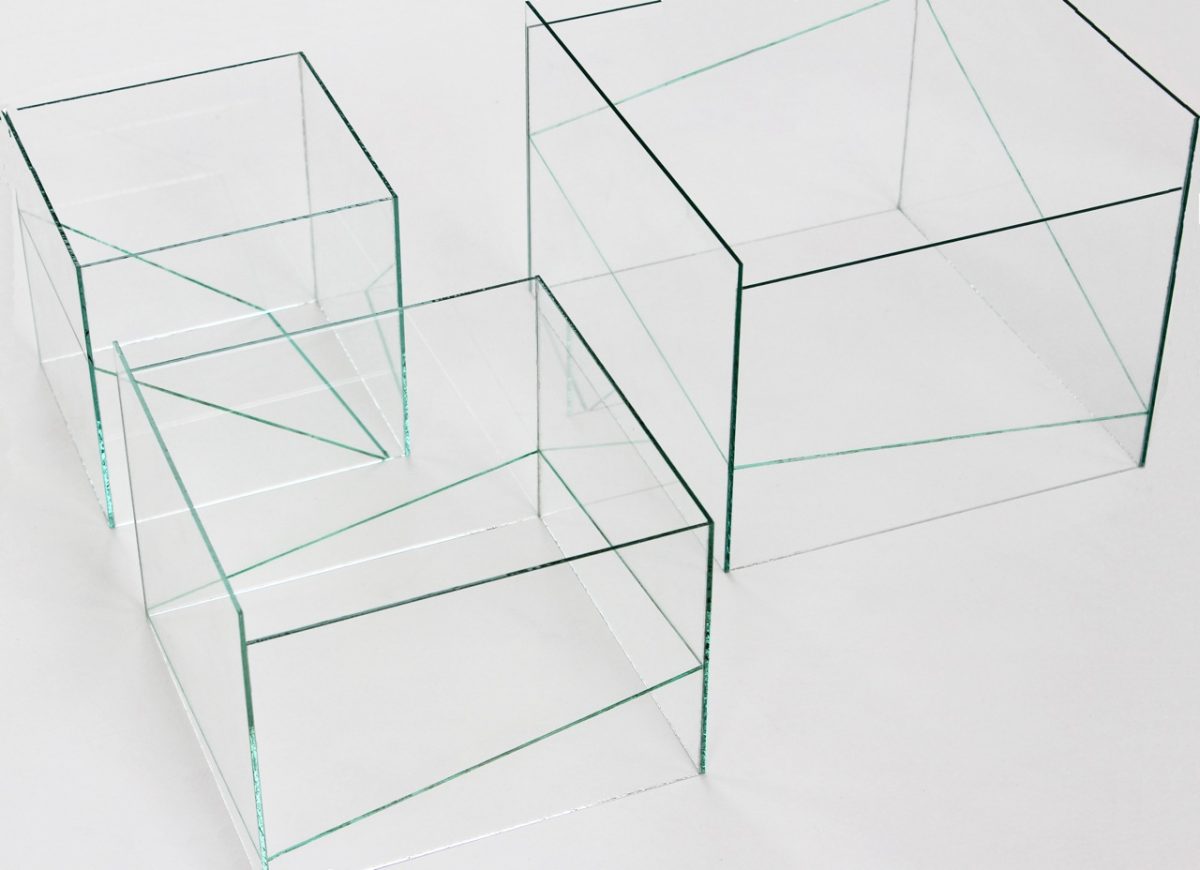 In this exhibition Marie Hanlon presents small sculptures, wall works and a moving image piece. Lines Tell Lies initially attempts to persuade the viewer to accept realities which do not exist. Line is employed as a transforming and provocative element in works which are concerned with the act of seeing and ideas of perception.

The impetus for the exhibition came from a previous work called Cornerspace in which 39 still images of corners and items placed in corners are linked in an unfolding video montage. The slow moving sequence mixes fictitious constructs, made of studio props, with real places. The idea here was not not to fully disguise the fiction but rather to set in motion a dreamlike sequence of suggestion and association. Rhona Clarke’s electronic sounds for Cornerspace are devised to create texture, spatial illusion and mystery. Aural echoing and reverberation mirror the unfolding imagery as it seeks to transcend its limitations. What is suggested is sometimes more real than what is actually there.

The ideas, materials and props from Cornerspace became the starting point for the other pieces in the exhibition. Using glass, perspex, pencils, nails, staples etc. the works are concerned with skewing reality, distorting scale, proposing associations and so on. The viewer is asked to believe that air has solid form and that illusion has real substance. Reality blurs into fiction through means which are playful and intriguing. Here lines deceive the eye and all is not what it seems. A time lapse exists between the first moment of looking and the true realization of what is actually there. This short interval allows a shift from looking to seeing, from seeing to perceiving.

Marie Hanlon was born in Kilkenny, she studied History of European Painting and English at University College, Dublin. In recent years collaborative works with several contemporary Irish composers have resulted in an expansion of her practice to include video, installation and sculpture. Marie Hanlon lives and works in Dublin, she is a member of Aosdana and is represented by Rubicon Projects.

Friday 8 September – Thursday 26 October 2017
The Source Arts Centre
Thurles
Co Tipperary
Telephone: +353 504 90204
info@sourcearts.ie
www.thesourceartscentre.ie
Opening hours / start times:
The Gallery is open Tuesday to Friday 10am to 5pm, 2 to 5pm on Saturday and from 7pm when there is an evening performance.
Admission / price: Free
Associated sites
Design: iCulture • Privacy and cookies
Tweets by dnoting
other sites designed or
assisted by iCulture