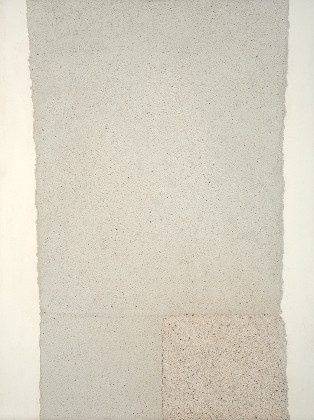 Following on from the recent success of Maria Simonds-Gooding: A Retrospective at the Royal Hibernian Academy, Taylor Galleries is delighted to present Enclosed Worlds, an exhibition of recent work by Maria Simonds-Gooding. The exhibition mostly features smaller works in plaster, and tapestry. Enclosed Worlds will be opened by Catherine Marshall at the private view, which takes place on Thursday 16 October 2014, 6 to 8pm, and the exhibition continues from 17 October to 15 November 2014.

Maria Simonds-Gooding’s artworks often look like maps and they unfailingly refer to the landscape and more especially to agriculture. They are monuments to mankind’s struggle to survive and claim a place in the natural world, but the farmer who made the enclosures or dug the water holes is as absent from her work as waterfalls are in the desert. Simonds- Gooding’s landscapes are occupied by humans by implication only. For all the references to the basic elements of agriculture, the human presence in her paintings, plaster and aluminium works is that of the artist herself and of her spiritual journeys…

Born in India in 1939, Maria Simonds-Gooding settled in Kerry in 1947. She studied art in the 1960s in Dublin, Brussels and Bath Academy, Corsham where she began working with plaster. She received the Carroll’s Award for best artist under 40 in 1970 and the Oireachtas Landscape Award in 1986. She represented Ireland at Young Artists 75 in New York in 1975. Simonds- Gooding became a member of Aosdána in 1981 and was elected to full membership of the RHA in 2012. She has exhibited in numerous group shows and solo exhibitions in Ireland and abroad and her work is represented in the public collections of The Arts Council / An Chomhairle Ealaíon; Irish Museum of Modern Art; Hirschhorn Museum, Washington DC; OPW / State Art Collection; Saatchi Collection, London; Central Bank, Dublin; and the Metropolitan Museum of Modern Art, New York; amongst others.

Copies of the full-colour catalogue produced by the Royal Hibernian Academy to accompany Maria Simonds-Gooding: A Retrospective will be available to purchase from Taylor Galleries during the run of the exhibition for €20. The catalogue features an essay by art critic John Yau and the artist in conversation with Colm Tóibín, courtesy of the Irish Museum of Modern Art.