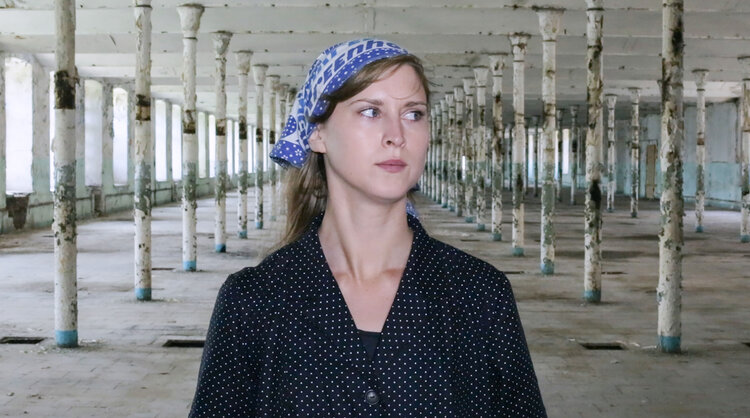 Gallery of Photography Ireland is currently closed due to the COVID-19 pandemic. As a result, we are presenting our previously scheduled events online, beginning with Maria Kapajeva’s project Dream is Wonderful, Yet Unclear. This exhibition was organised as part of A Woman’s Work, a project funded by Creative Europe to examine the nature of women’s labour through photography, and our own Contemporary Women’s Practice season.

Using a multidisciplinary approach, including archival elements alongside her own images and installations, this project considers the history of the community surrounding a textile mill in Narva, Estonia, now closed, where members of the artist’s family once worked. Kapajeva spent her childhood at the mill, drawing patterns and dreaming about becoming a fabric designer like her mother. The story of this one small community is set in the larger context of post-industrial cities worldwide as the loss of their former roles leave them seeking new identities. Drawing on aspects of her mother’s work, her own unrealised childhood dreams and the failed ambition of industrial collectivization, Kapajeva underlines the complex relationship between personal and public memory that together form our historical narratives. By including a range of different voices and approaches, she indicates that these histories can never be straightforward, but are shaped by multiple, often conflicting forces.

The title of the exhibition is borrowed from the lyrics of a song called March of Enthusiasts, featured in the Soviet-era film The Bright Way (1940), starring Lyubov Orlova as a female weaver making an idealised journey from peasant to heroic worker. This particular line from the song was later censored because the word ‘unclear’ was seen as raising doubts about the Soviet project. The idea of a wonderful dream is intended as a common thread throughout the exhibition, but so too is the lack of clarity that characterizes our memories of the past. This is expressed by Kapajeva’s neon sculpture Dream is (un)clear, which uses that same phrase in Russian with a consistently flickering prefix ‘un’ (or ‘не’ in Russian), embracing the hesitation and fluctuation between vision and reality characteristic to all dreams, be they big or small.

Kapajeva’s own video piece The Bright Way is a collaboration with Estonian dancer Maarja Tõnisson. It is an attempt to deconstruct the archetypal main character from the original film, not least by resituating her in the now abandoned and derelict mill, which closed down in 2009 after 150 years of operation. Kapajeva also leaves audible her instructions from behind the camera, drawing the viewer’s attention to the manipulative mechanisms behind propaganda films.

Kapajeva based her series Cutbacks on images taken from abandoned photographic posters found in one of the buildings that once belonged to the mill. The images, produced in the early 1980s, were displayed outside of the mill celebrating its people and machines. Working with the found photographs as objects that have been deemed worthless or neglected, Kapajeva questions existing values and norms, directing our attention to abandonment and marginalisation as political practices. She has removed the figures from the images, replacing them with a carefully hand-painted pattern that references the transparency layer in Adobe Photoshop. Together these elements suggest material obsolescence in a post-digital world, but Kapajeva also subtly counters that through the use of craft techniques in the production of the work.

In September 2017 Kapajeva invited all former workers of the closed textile mill to take their group photo in front of the former main gates of the mill, once a meaningful place of their lives. Altogether 160 former workers between the ages of 40 and 90 came. Everyone who posed received a copy of the image. This staging was an attempt to return a disappeared feeling of unity and togetherness, which for many of them has already turned into nostalgia rather than true memories of their time at the mill.

This is contrasted with an installation consisting of four orchestrated carousel slide projectors displaying hundreds of photo collages made of the group photos collected from the former workers of the closed textile mill. Recalling the deafening rhythm of the looms that never ceased to fill the everyday life of the textile workers, this audio-visual installation creates the feeling of an elegiac symphony dedicated to the bankrupted textile manufacturer. However, textiles that fall from the walls of the room and that carry interview quotes from dozens of different workers seem like a compact story told by one worker about the blossoming and the fall of the mill. These orally transmitted memories have a literary quality, only amplified by their presentation.

One of the former workers also shared with her personal diaries with the artist, dated from the 1980 to the 1990s. With her permission, Kapajeva included a selection of the pages to show a combination of notes as a record of these times, as well as a representation of the invisible daily life of every female worker at the mill. Together, they reveal an unspoken double burden that most of these women carried by doing their best to be a successful textile worker as well as a wife and mother at home.

For her site-specific work Mapping My Mother Kapajeva used one of the patterns created by her mother, a textile designer, during her years of working at the mill. By stamping a selected floral pattern, she substitutes something variable and laboriously hand-crafted for what should be a mechanical process, returning the. This work is an ongoing project and Kapajeva has recreated her mother’s designs at various locations in several countries, where the work resonates in different ways with the place and its history. These designs have also been used on the cover of Kapajeva’s new book, which brings together all the different elements of the project.

The textile piece 12,000 consists of printed logos of the closed textile mill reflecting the number of employees worked there at its best times. The famous textile mill, bankrupted in 2009, was a significant enterprise in the town throughout the 150 years of its existence. Since 2014, Kapajeva has been collecting interviews with former workers, their digitised family albums and various donated objects. One of the objects she received was a stamp with the Soviet logo of the mill. This one or some other stamps were used at the control check department for marking the rejected pieces of the produced fabrics. Kapajeva stamped this logo 12,000 times thinking of each worker who lost their jobs, including her own parents.

Failed Rapport is based on a drawing created by Kapajeva as a child. Inspired by her mother’s work as a textile designer, she tried to create her own fabric rapport (a repetitive pattern). This design carries the desires of its time: the Western characters, new heroes of Soviet children, Mickey Mouse and Donald Duck, which were just entering these territories as the first symbols of the new market economy era. Dreaming of a fabric with her own print, her mother refused to submit it to the mill for consideration. Failed Rapport is not just about a refused design, but also about misunderstanding (non-rapport) between mother and daughter, about the conflict of interests between Western ideology and Soviet censorship, about failed dreams and nostalgia formed from them. For a solo exhibition in 2017 Kapajeva decided to break this circle of failure and print the design on fabric as it is. She stitched a skirt and wore it at the opening, making her own dreams come true.

Alongside the exhibition, Kapajeva will launch her new artist’s book Dream Is Wonderful, Yet Unclear. It is being published by Milda Books, Latvia, with the kind support of the Estonian Cultural Endowment, the British Council in Estonia, A Woman’s Work/ Creative Europe, and Gallery of Photography Ireland. As a result of current circumstances the launch for this publication will now take place virtually with details to be announced shortly.