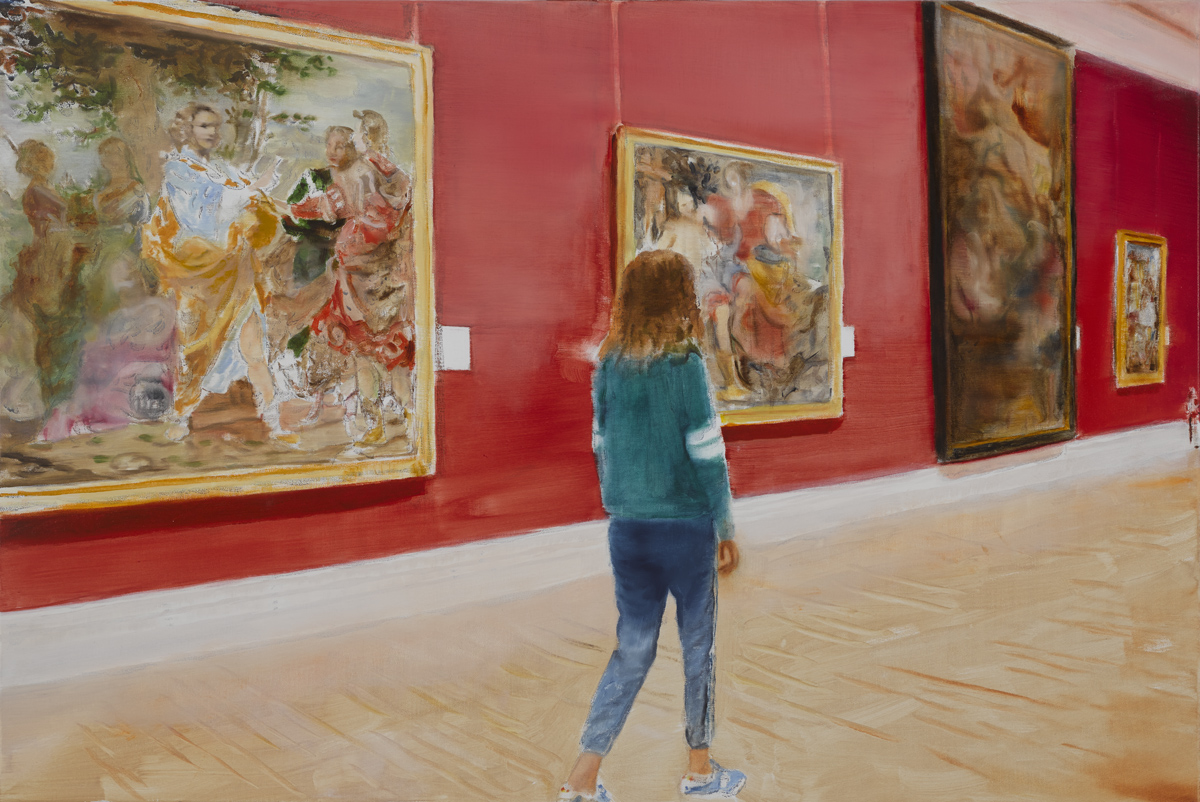 This exhibition of Margaret Corcoran’s paintings re-enters and elaborates on the themes from an earlier series; The Enquiry Series painted in 2002. In this earlier series, subjects such as identity, national identity, colonialism and post-colonialism are explored in an art-historical and social context.

The Enquiry Series takes its title from Edmund Burke’s theories of The Sublime and follows the gaze of a young female, (the artist’s eldest daughter) during the final years of her childhood – finding her way along the green walls of the Milltown Rooms in The National Gallery of Ireland, viewing the historically and politically loaded paintings.

It is unusual for Corcoran to revisit her older work but in this case, the opportunity presented itself organically. An immediate prompt for this new series of paintings, entitled An Enquiry II, was the occasion of her daughter Thérèse, at a similar age, standing in front of the recent Vermeer exhibition at the NGI. But also the exuberance of a now complete renovation of the entire building and the riot of colour, the gleaming re-gilded frames and the new orders and choices of hanging. Permission and assistance was granted by the NGI and a documentation began in order to produce a large body of paintings.

Much has changed in the intervening years. Ireland has undergone cultural transformations. As a nation we are changed and we are also in changing times. Interestingly, the previous work was made just as the euro replaced our Irish coinage. In both series we are exploring rooms where our Irishness played out against a backdrop of colonialism and the great beauty and complexities of European art. These new paintings are made in the looming approach and unfoldings of Brexit. Still we feel the effects of the political decisions of our British neighbours.

These new works reflect the times we live in. They convey the hope for a new national confidence, particularly in female terms. The young woman walks freely through the rooms before the iconography of myth and religion. She has choices.

This exhibition is part of a Production Residency at IMMA in collaboration with Kevin Kavanagh Dublin.