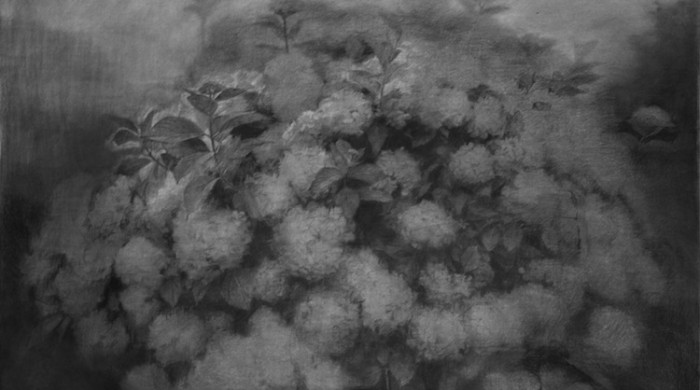 The starting point for Maeve McCarthy RHA recent work is a return to where she grew up in Glenageary, Co Dublin. While her previous work, Kerry Nighttime Landscapes were small in scale and executed in traditional gesso, tempera and oils, these large atmospheric charcoal drawings are on a new scale, though continuing a nocturne theme. Childhood memory is recalled, particularly of her grandmother, Mumsie (Elsie), who shared the family house. Elsie grew up on a farm in Co. Down and for 10 years was a schoolteacher in the Glens of Antrim before moving to Dublin in 1923.

Maeve McCarthy was born in 1964, lives and works in Dublin. She spent several years in the USA following graduation from NCAD and has worked in film animation in Ireland and Germany. In 2007 she spent a year in Idaho. She has exhibited nationally and internationally, including the BP Portrait Awards at the National Portrait Gallery, London. McCarthy has won several awards, mainly for portraiture. Her portrait of Maeve Binchy is in the collection of the National Gallery of Ireland. Other collections include the National Museum, Haverty Trust, National Self Portrait Collection, AXA Insurance PLC, OPW, Royal Dublin Society, Royal College of Physicians of Ireland and many private collections, both in Ireland and abroad. She has been a full member of the RHA since 2007.