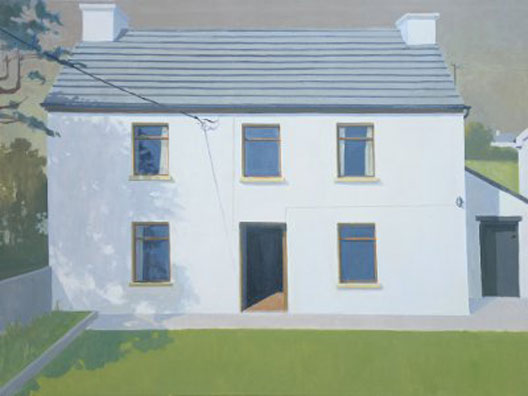 This work follows a year living in Upper Teer (or Tír), a West Kerry townland at the foot of Mt. Brandon. My rented home, a traditional two-storey farmhouse which appears in several of the paintings, had been a holiday home for 20 years and is still known locally by the name of its previous owners. The house fosters a nostalgia for my grandmother’s ancestral farmhouse in Co. Down, where my mother spent most of her childhood summers and I would occasionally visit as a child, before it was later sold and abandoned for an adjacent new house.

The preoccupation with the contrast of light and dark continues from previous work. In the night paintings I am invoking the internal landscape of the individual viewer, be it warmth, comfort, home, memories of childhood or security. The viewer is cast in darkness and is an interloper, a voyeur, inquisitive to know, but through a lack of information might revert to memories for context. The darkness is elemental and is ultimately the counterpoint to the safety and warmth of the lit interiors, although on closer inspection, some of these houses are not occupied, but are lit by an outside light.

In the day scenes of similar subjects, the viewer is cast in light – their vantage point itself illuminated – and is a spectator as the house has almost a megalithic solidity or presence in the landscape. It’s exterior is scorched into view by the absence of darkness. The interior is blocked from our view by relative darkness, empty now of the memories and warmth. We are reminded that the function of a house is to contain an interior, a place of privacy.

These images could also be a metaphor for a certain aspect of the psyche: the need for reflection before we venture into the outside world with it’s relative chaos and distraction: our true home perhaps being inside ourselves.

This is Maeve’s third solo show at The Molesworth Gallery. She shows regularly at The RHA Annual Exhibition and has shown at the BP Portrait Awards Exhibition, The National Portrait Gallery, London, as well as other juried and group exhibitions. Her awards include The Irish-US Council for Commerce and Industry Portrait Prize and The Don Niccola D’Ardia Carraciolo Award, both awarded at the RHA. Commissions include a portrait of Maeve Binchy for the National Gallery of Ireland. Her work is in many private and public collections.

This show is dedicated to Maeve’s mother, Irene, who would approve of her new found gardening skills.