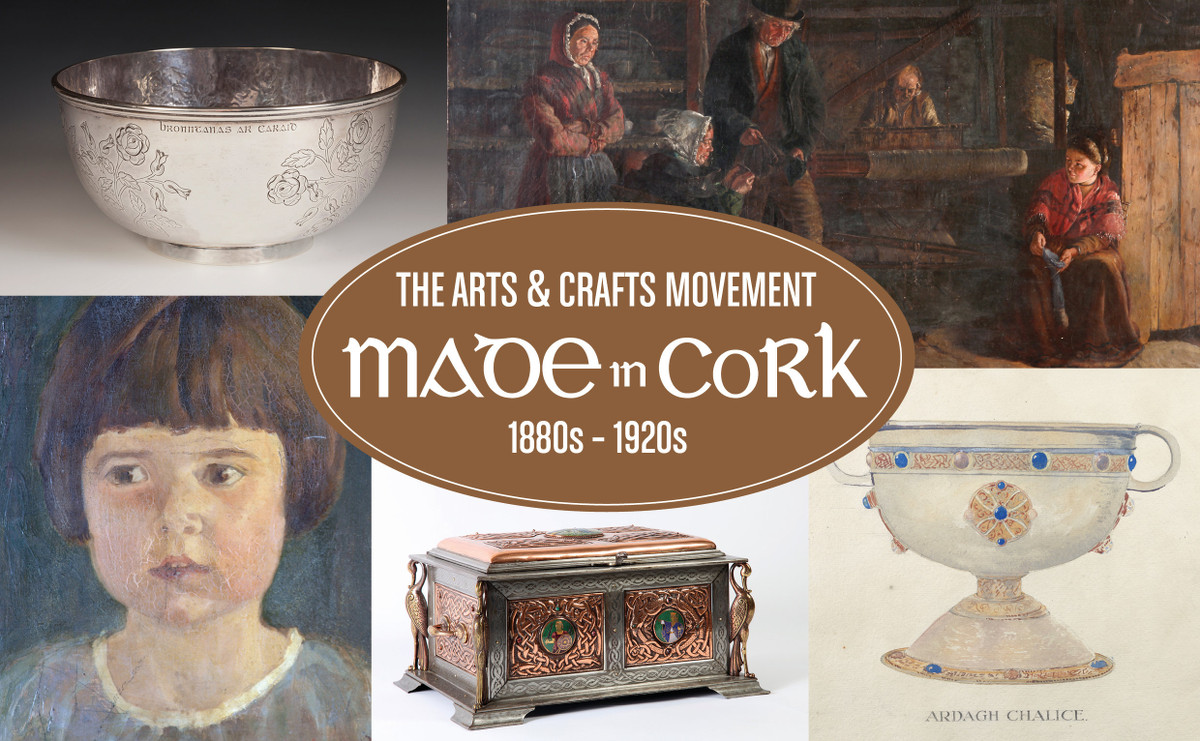 William Morris (d.1896) and Walter Crane (d.1915), leaders of the Arts and Crafts movement in England were socialists. However, when the Arts and Crafts Society of Ireland was founded in 1894 its aims were broadly patriotic. It hoped to stimulate the production of arts and crafts in Ireland, dispelling the traditional hierarchies between fine and applied art, by making the craftsperson “less of a machine producing many objects from one pattern” and more of an individual working from original design through exhibitions, lectures, publications etc.

Many ideals of Morris and Crane were espoused by James Brenan, headmaster of the Cork School of Art (from 1860-1889) before the Arts and Crafts Society of Ireland was created.   Brenan worked at the Great Exhibition in London in 1851 and saw the prevailing theory of the application of Art to Industry in a positive light. The magnificent extension to the Cork School of Art, built in 1884, with  £20,000 donated by local businessman WH Crawford provided the city with the finest art school in the country and the means to excel at woodcarving and lace-making amongst other applied arts.

Such was the quality of work being produced in Cork, that in 1893 a chair carved by Annie Crooke from County Cork was exhibited at the Chicago World’s Fair. The intricately carved armchair and other furniture in the exhibition, exemplifies the expression of the Arts and Crafts ideal of beautiful and useful objects for use in the domestic home.

Taking inspiration from Gaelic League’s metalwork demonstrations at the Cork International Exhibition of 1902, shortly afterwards the Youghal Art Metal Workers were formed. The new Abbey Theatre purchased a number of huge mirrors for interior decoration and, a number of these magnificent works, will be displayed alongside for the first time since the Abbey Fire of 1951.

“Made in Cork: The Arts and Crafts Movement 1880’s – 1920’s” brings to life the cross section of people involved in the Arts and Crafts movement in Cork, where artisan workers in lace and metalwork, the Cork School of Art, artists, craftspeople, religious orders and business families like the Days, Egan & Sons, and James Watson & Sons flourished and influenced the wider social structure of Cork and beyond.