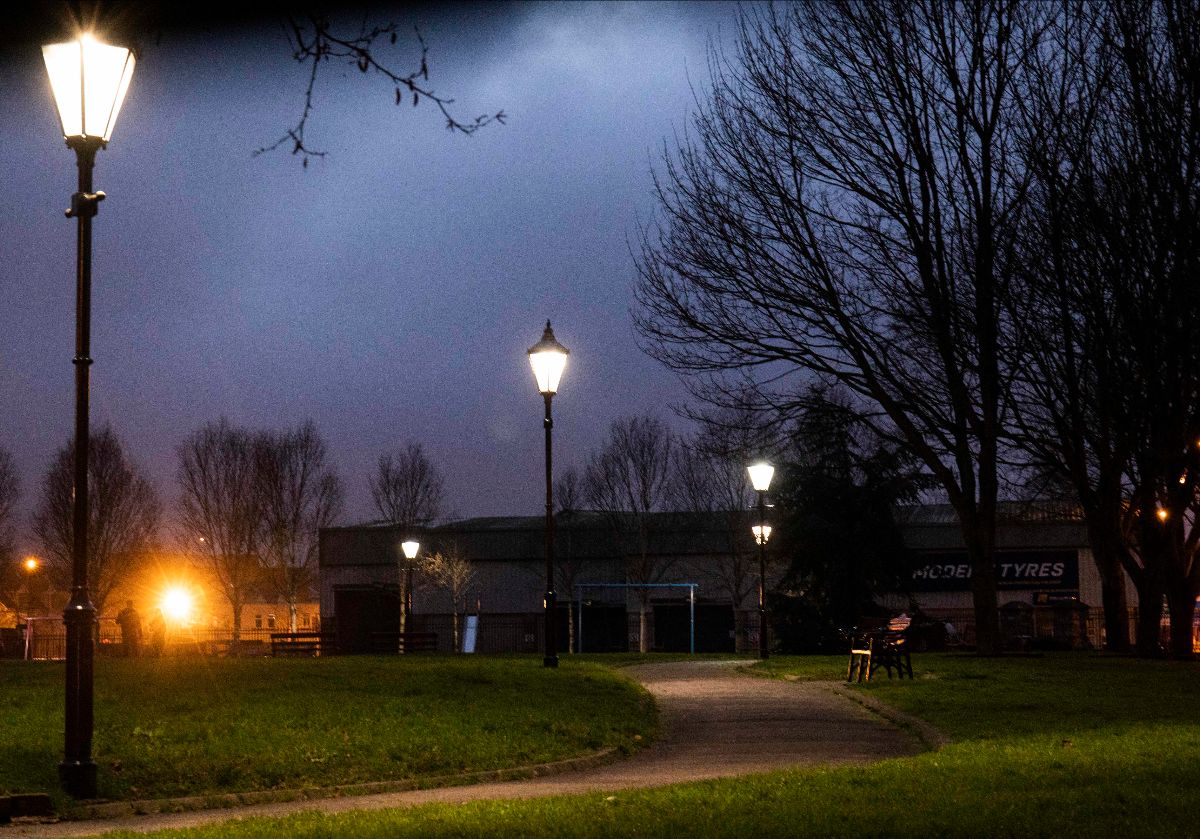 Evening Echo is a public artwork by New Zealand artist Maddie Leach. It is sited on old gasometer land gifted by Bord Gáis to Cork City Council in the late 1980s. This site was subsequently re-dedicated as Shalom Park in 1989. The park sits in the centre of the old Cork neighbourhood known locally as ‘Jewtown’. This neighbourhood is also home to the National Sculpture Factory.

Evening Echo is an art project generated as an artist’s response to the particularities of place and locality. Now in its tenth year, the project continues to gather support from the Cork Hebrew Congregation, Cork City Council, Gas Networks Ireland, (formerly Bord Gáis) and its local community.  The project is manifested in a sequence of custom-built lamps, a remote timing system, a highly controlled sense of duration, a list of future dates, an annual announcement in Cork’s Evening Echo newspaper and a promissory agreement. Evening Echo is fleetingly activated on an annual cycle, maintaining a delicate but persistent visibility in the park and re-activating its connection to Cork’s Jewish history. Intended to exist in perpetuity, the project maintains a delicate position between optimism for its future existence and the possibility of its own discontinuance.

This year the last night of Hanukkah is Thursday December 17th and offers the only opportunity to see the tall ninth lamp alight until next year. The cycle begins 10 minutes before sunset, which this year occurs at 4:23pm, and continues for 30 minutes after sunset when the ninth lamp will be extinguished.

Under normal circumstances we would extend an open invitation to view the lighting ceremony to anyone who wished to join us, but as this is not possible due to current social gathering restriction guidelines we instead invite you to view a live stream that will be broadcast on the Cork City Council Facebook page.

Maddie Leach’s work is largely project-based, site responsive and conceptually driven and addresses new thinking on art, sociality and place-based practices.  She seeks viable ways of making artworks in order to interpret and respond to unique place-determined content and she is recognised for innovatively investigating ideas of audience spectatorship, expectation and participation in relation to art works. Leach’s recent projects include commissions for Gothenburg Biennale for Contemporary Art (GIBCA 2017); Jakarta Biennale (Indonesia, 2015) and spaced 2: future recall (Perth, Australia, 2014-15). She was shortlisted for New Zealand’s premier Walters Prize in 2014 for her project ‘If you find the good oil let us know’. Leach was born in Auckland, New Zealand in 1970 and currently lives and works in Gothenburg, Sweden

A catalogue with essays by Mick Wilson (artist, writer, educator. Head of the Valand Academy of Art, University of Gothenburg,) and Matt Packer (Director, EVA International, previously Curator, Glucksman Gallery, Cork) has been published by the National Sculpture Factory.