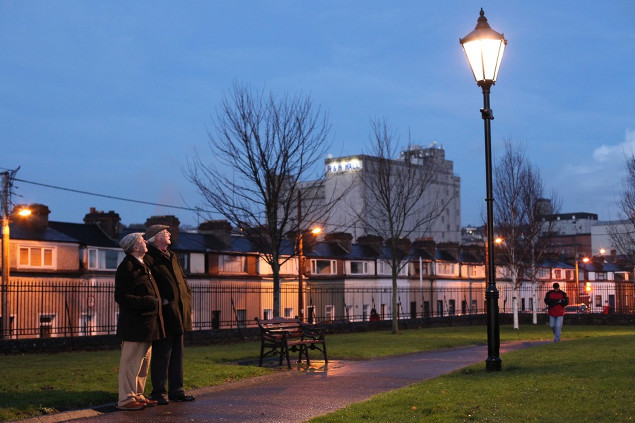 Evening Echo is sited on old gasometer land gifted by Cork Gas Company to Cork City Council in the late 1980s, and subsequently dedicated as Shalom Park in 1989. The park sits in the centre of an old Cork neighbourhood known locally as ‘Jewtown.’ This neighbourhood is also home to the National Sculpture Factory.Not a specific commission, nor working to a curatorial brief, Evening Echo is a project generated as an artist’s response to the particularities of a place and has quietly gathered support from Cork Hebrew Congregation, Cork City Council, Bord Gáis and a local Cork newspaper, the Evening Echo.

References to the slow subsidence of the Jewish community in Cork have been present for years, but there is now a palpable sense of disappearance. Within the Cork Hebrew Congregation there are practical preparations underway for this, as yet unknown, future moment of cessation. Evening Echo moves through a series of thoughts and questions about what it might mean to be at this kind of cusp, both for the Jewish community and for other communities in Cork.

Evening Echo is manifested in a sequence of custom-built lamps, remote timing systems operated from Paris, a highly controlled sense of duration, a list of future dates, an annual announcement in Cork’s Evening Echo newspaper and a promissory agreement. Fleetingly activated on an annual cycle, and intended to exist in perpetuity, the project maintains a delicate position between optimism for its future existence and the possibility of its own discontinuance.

A catalogue with essays by Mick Wilson (artist, writer, educator) and Matt Packer (Curator of Exhibitions & Projects, Lewis Glucksman Gallery) has been published by the National Sculpture Factory.

Leach was born in Auckland, New Zealand in 1970 and currently lives and works in Wellington.