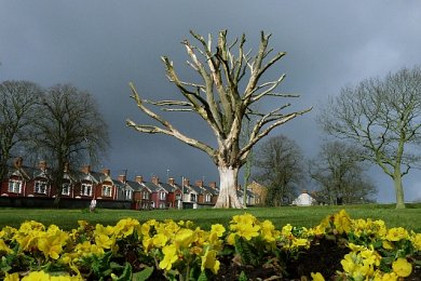 Exhibition Launch Saturday 14 December at 4 pm • followed by Dead On – The Remix, upstairs at the Derby Bar, 9pm – Late

The tree, an elm (something of the star of the park and like all stars more appreciated after death) was killed by Dutch Elm Disease, caused by the fungus Ophiostoma novo-ulmi. It is a type of disease known as a vascular wilt because the fungus blocks the vascular (water transport) system, causing the branches to wilt and die. It is spread by elm bark beetles Scolytusmultistriatus. The beetles burrow their way into the dying or dead tree, the female laying eggs and adults, carrying the Dutch Elm pathogen emerge into the world to find new victims nearby.

Drilling and boring has been at the essence of Morris’s approach to Dead On mimicking the bark beetle’s invasion on the conscious and subconscious level. Many of us have a terror of drilling, often caused by the fear of the dentist’s drill, so much so that we’d rather endure the pain of toothache than go to the dentist. There’s even a term for it: Odontophobia – a state of denial, a terror of invasion even that of a supposedly benign nature. So if we’re afraid of what’s good for us imagine how terrifying the indifference of nature is; how the insectoid, the fungal, the viral care nothing for our civilization or superiority. As we listen to the tree, something is alive in there. The sounds are familiar yet unsettling; something seems to be eating its way out. The sound isn’t on the tree. It is of the tree. It has become a mechanical, industrial heart beat reanimating something that had flat-lined long ago. ‘Everything must have a beginning and that beginning must be linked to something that went before’ as Mary Shelley points out.2 There is something that reminds one of Victor Frankenstein in the concept behind this work. It has made life. We can imagine the artist in his laboratory pulling a lever, a lightning bolt flashing on a transformer and a cry of ‘It lives!’

Yet the sound is subtle, pervasive, something slowly seeping into us, and all the more powerful for its viral aspect. We are all to some degree misophonics (from misophonia – the hatred of certain sounds) and there are noises that trigger the animal in us and we react with disgust or animosity. It’s the feeling of something on the edge of consciousness, something scuttling across the ceiling, something scratching behind the wall. Even if we know what it is, we don’t know what it’s doing and what it exactly means. It’s this lack of knowledge, this lack of control that makes us shudder, makes us aware of our mortality, an ambiguity that puts into perspective our concepts of security and authority. The most devastating things creep up on us, work their way into our system and in the end own us.

Brooke Park dates from 1840 and was the location of Gwynn’s Institute for Orphan Boys (and later girls) from Derry and Donegal. It became a public park in 1901 after John Hood Brooke bequeathed a portion of his will to purchase a portion of land to be used for the recreation of the citizenry of Derry. During the 1970’s it was a British army base. The army have now gone and it has now returned to its role as a public park. It is due to be redeveloped in 2014 and it is very likely that the ‘Dead On’ tree will be felled. Everything is temporary, even permanence: ‘For last year’s words belong to last year’s language. And next year’s words await another voice.’ 3 Eliot puts it eloquently. When the sound stops its echo will remain, rooted in our memory, larval-like and waiting out winter.

Dead On is the third of the Void ‘gardens’ and following on from Katie Holten’s reanimation of a disused factory space and Ackroyd and Harvey’s rejuvenation of a former military barracks and it continues the theme of considering public art in a new light; as something fluid and subtle yet epic, rather than static, concrete and monumental.

Locky Morris was born in Derry City, Northern Ireland, where he continues to live and work. He has been exhibiting nationally and internationally since the mid 1980s. Recent solo projects include A Week in Goals, Creggan, Derry; Me and my Shadow, Mannheimer Kunstverein, Germany; From Day One, Mother’s Tankstation, Dublin and This Then, The Golden Thread Gallery, Belfast. Recent group exhibitions include, The Walls that Divide Us, Apexart in New York City; All Humans Do, the Model, Sligo and White Box Gallery, NYC; What Became Of The People We Used To Be, Tulca Festival of Visual Arts, Galway. His practice has also included many works and interventions in the public realm. His early work was shown in the British Art Show — New North and Strongholds at the Tate Gallery, Liverpool, while also exhibiting in a wide range of spaces in his local neighbourhood—such as disused bookmakers, community centres and vacant premises. Forthcoming exhibitions include Invisible Violence at Artium, Vitoria, Spain, and the Museum of Contemporary Art, Belgrade (for more info please visit www.lockymorris.org).

On 14 December a free return bus from Belfast will depart at 2.30 pm and return at midnight, email voidsites@derryvoid.com to reserve a seat before 5pm on 12.12