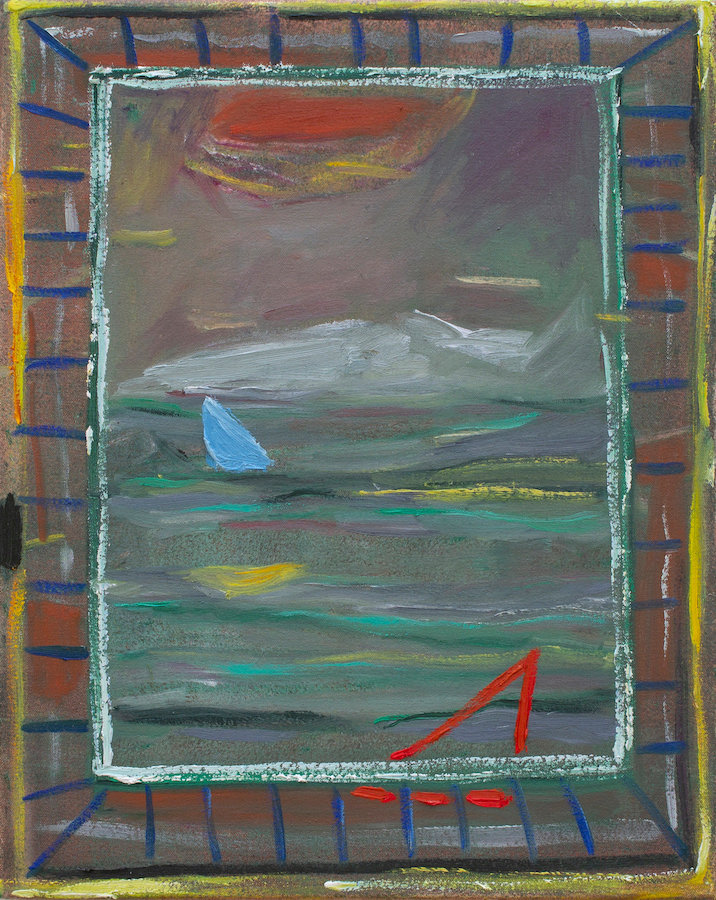 When you look at O’Connell’s paintings, over time it becomes apparent that they are in flux, spatially and temporally. Nothing within them is static and instead moods drift over the canvas and furtive notions make a brisk appearance. The titles of the work refer to atmospheric vignettes that conjure sensory experience, leaving an emotional imprint. In Midnight Swim, the moon spills its reflection over the choppy tide and unexpected colours lap over the waves and pierce through clouds.

They are strange and mysterious compositions that incorporate elements of visionary landscape painting, still life and abstraction. Experientially, the paintings have a tendency to leave the viewer unmoored, with very little by way of logic or points of reference to cleave to. And yet in this negation, other ideas of abstraction release, allowing for a more existential capacity within the paintings.

O’Connell has described a painting process in which her own handling of paint is secondary to the potential for chance and caprice to inform the work. Compositions are often dismantled or obliterated by unpredictable gestures, causing them to digress or to re-iterate a motif that has endured within them. It is an explorative process whereby the urge to glean a sense of satisfaction from chance aesthetic unity is constantly set aside by O’Connell who continues to reset paintings and pose contradictions within them. She is an artist who is less interested in controlling the medium or imposing a resolve and instead she allows the paintings to coalesce on their own terms.

Sometimes, tentative suggestions seek each other out and converse across a plain of faded palimpsest and they are let alone – their frivolity contrasting with the dense residual patina of the painting’s own history. In this way the forms, colours, marks, washes and tones within the paintings cooperate to create a sense of drama. In some instances, paintings appear to have been imprinted upon each other, giving a sense of resonance amidst a cacophony of marks. The paintings inform each other, grow from one another and in some cases are cannibalised by each other, recurring as collage elements and composites of another painting.

This is a reflection of the myriad temporal and spatial dismissals that occur within O’Connell’s compositions. The viewer is allowed glimpses from numerous perspectives that soar to bird’s eye vantage points and drop into subterranean chasms. The paintings can be disorientating and idiosyncratic and still they retain a sense of synchronicity.

Inhabit the garden. Shall we follow?
Quick, said the bird, find them, find them,
Round the corner. Through the first gate,
Into our first world, shall we follow
The deception of the thrush? Into our first world.
There they were, dignified, invisible,
Moving without pressure, over the dead leaves,
In the autumn heat, through the vibrant air,
And the bird called, in response to
The unheard music hidden in the shrubbery,
And the unseen eyebeam crossed, for the roses
Had the look of flowers that are looked at.
There they were as our guests, accepted and accepting.
So we moved, and they, in a formal pattern,
Along the empty alley, into the box circle,
To look down into the drained pool.
Dry the pool, dry concrete, brown edged,
And the pool was filled with water out of sunlight,
And the lotos rose, quietly, quietly,
The surface glittered out of heart of light,
And they were behind us, reflected in the pool.
Then a cloud passed, and the pool was empty.
Go, said the bird, for the leaves were full of children,
Hidden excitedly, containing laughter.
Go, go, go, said the bird: human kind
Cannot bear very much reality.
Time past and time future
What might have been and what has been
Point to one end, which is always present.