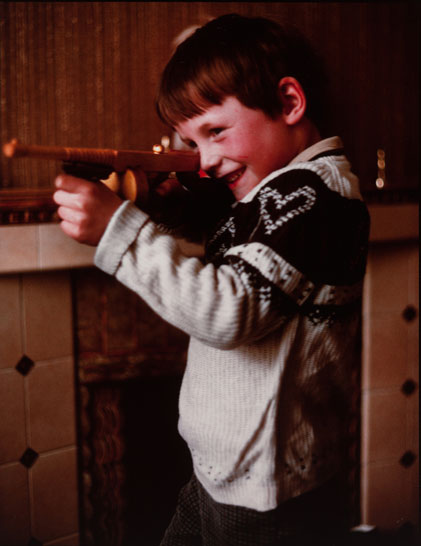 An exhibition of works donated to the Irish Museum of Modern Art by Dublin-born artist Les Levine, opens to the public at IMMA on Wednesday 23 March 2011. Mindful Media: Works from the 1970s comprises two portfolios of etchings and photographic works mixing text and image to reinforce the artist’s belief that social and political problems are valid concerns for art.

Both works are entitled The Troubles: An Artist’s Document of Ulster, 1972. The first is a group of 80 cibachrome photographs forming part of a series of works for which the artist coined the terms “media sculpture” and “media art”. The second suite of the same title comprises 18 photo-etchings made in 1979 from photographs taken in 1972.

Speaking of the photographic suite of 80 works, executed in 1972, Levine says; “The piece is extremely colourful. It deals with every aspect of the situation. It goes into Catholic homes, Protestant homes, churches, funerals, explosions…My approach was to take it from the human point of view, not the political. So in all cases, I tried to show the people involved and to evoke some state of mind that they were representing in the photo. I avoided taking sides or showing bias. I think the photos speak for themselves and tell their own extraordinary story.”

During his prolific career Levine has produced major series of works about the manifold effects and functions of the media and information systems. Since 1976 he has produced many major media campaigns throughout North America, Europe and Australia. For these works, in many cases he has used billboards in which he subverts the language of mass advertising to interrogate social and political anxieties. In most cases these billboard campaigns operate throughout an entire city virtually turning that entire city into a media sculpture. His billboard campaign, entitled Blame God, shown as part of IMMA’s From Beyond the Pale season of exhibitions in 1994, attracted huge public attention.

Les Levine was born in Dublin in 1935. At the age of eight he met the Irish painter Jack B. Yeats and remained friends with him until his death. He studied at the Central School of Arts and Crafts, London, before moving to Toronto in 1958, where he continued his studies at the New School of Art. Levine’s artistic practice incorporates various means including painting, sculpture, installation, performance work, mail art and artists’ books.

Moving to New York in the 1960s, Levine became a leading conceptual art figure, intersecting art and life in a variety of projects such as Levine’s Restaurant, 1969 and the conceptual museum he invented in 1970 The Museum of Mott Art, Inc. He also published a monthly magazine in 1969 Culture Hero. In the 1960s, Levine was one of the first artists to work with video and television. His first video tapes were produced in 1964. His work was to become a precursor to the new generation of experimental artists who were exploring the possibilities of the moving image including Dan Graham, Gary Hill and Bruce Nauman.

In 2004 Les Levine edited/curated Printed Project 04 in an issue entitled The Self Express. This presented a multi-faceted portrait of the artist conducted by 15 different interviewers. The title comes from the idea that all art is a form of self-expression. The Self Express interviews could be seen as mental portraits of the interviewers.

Levine continues to live and work in New York.

The exhibition is curated by Christina Kennedy, Head of Collections, IMMA.