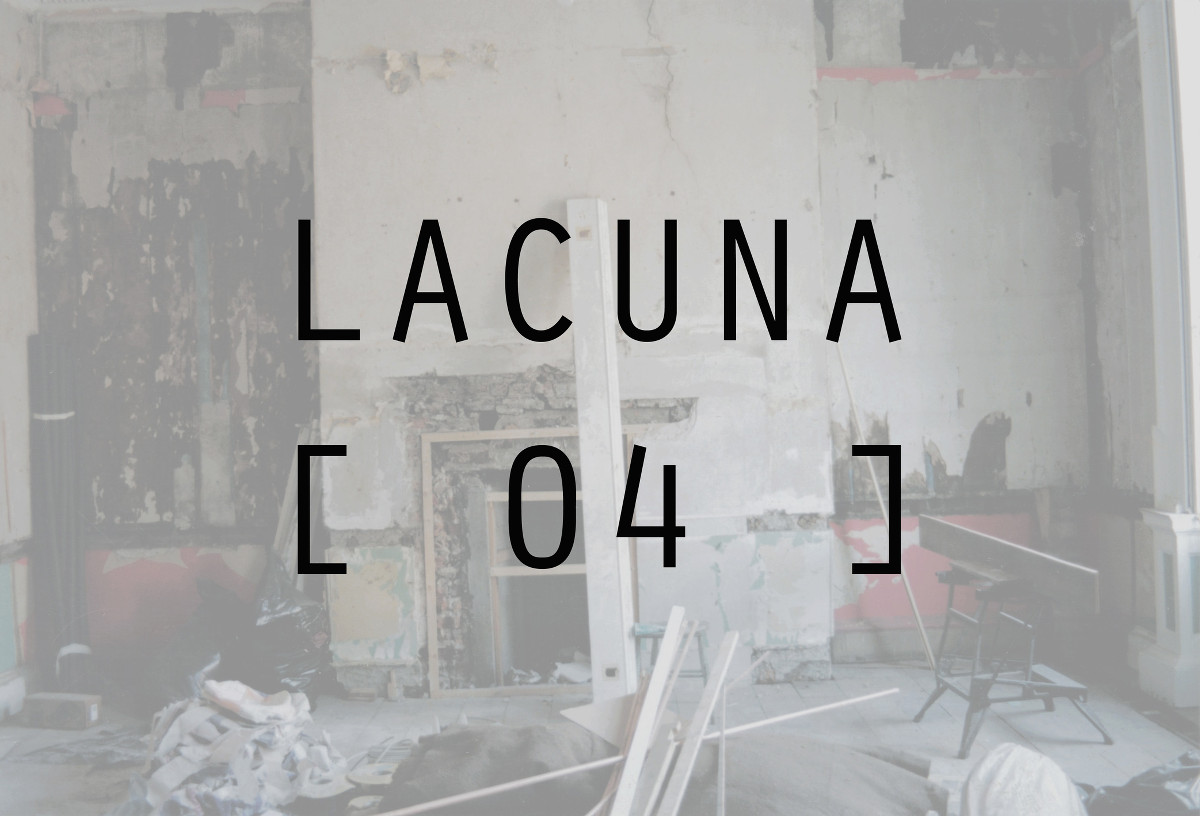 LACUNA [ ], the independent curatorial project at Taylor Galleries co-curated by David Quinn and Sabina Mac Mahon, returns for a fourth outing. The ongoing occasional series of exhibitions runs alongside the gallery’s main programme and embraces experimental and enquiring practices in image- and object-making.

Nine artists, both Irish and international, have been invited to take part in the fourth iteration of the series, LACUNA [ 04 ]. Rather than asking participating artists to respond to a theme, LACUNA [ 04 ] embraces the diversity of their current practices, processes and concerns, offering artists a space in which to show new and recent work that encompasses sculpture, printmaking, installation, painting, photography and mixed-media work.

Sharon Etgar’s practice comprises a variety of collage-based media (using found papers, fabrics and thread), mostly executed on a small scale. She has an innate feeling for colour, form and texture, all of which combine in her vibrant works to produce harmonious, idiosyncratic pieces.

Since 2012 Vincent Hawkins has been making free-form cardboard works based on the abstract shapes in his paintings, releasing them from the restriction of the rectilinear surface of the canvas and examining the relationships they form with one another. He is generally unprecious about his work and delights in playfully exploiting the happy accidents he achieves through relatively meagre means.

In her sculptures Eimear Murphy combines found industrial materials (usually timber and glass) with concrete through a complex mould-making process. She is interested in testing the limits of the materials she uses and her wall- and floor-based works possess a seemingly infinite variety of texture and form.

Pauline O’Connell’s work investigates the rural discourse as a system of representation – a landscape, a place, a people, a subject and a philosophy – that is translated through her practice using sculpture, photography, video, text and audio. Current projects include The Weather Reports, Beating the Bounds and The Community Field.

Eddie Rafferty’s work is inspired by people, the landscape and their histories. His paintings and drawings are usually about storytelling, and he is fascinated by the idea of trying to recapture a story or memory and preserve it in pictures.

Gerda Teljeur is largely influenced by landscape and her work fluctuates between monumental large-scale pieces and groupings of smaller, more intimate, drawings. Using an abstract mark-making language all her own, Teljeur’s free-form works subtly negotiate the spaces that exist between light and shade.

Alongside his work in the film industry, Andrew Ward is a photographer best known for his Sofas of LA series, which has been ongoing since 2012. Trawling the streets of Los Angeles in search of abandoned sofas of all shapes and sizes, to date he has amassed hundreds of uniformly-composed images that echo the formality of the Becher’s typologies and speak of the transient nature of LA living.

Using a vocabulary of abstract forms, Tad Wiley’s paintings on wood panel, canvas and paper demonstrate an interest in surface as well as form. Recently he has worked mostly on a small scale in response to years of making very large paintings.

Sharon Etgar (b. Jerusalem, Israel, 1975) was educated at Bezalel Academy of Arts and Design from 1997 to 2001, the Jerusalem Studio School for Painting and Drawing (JSS) from 2003 to 2007 and has spent three summers studying with JSS at the International School of Painting and Drawing in Umbria, Italy. She exhibits regularly with Davis & Langdale Gallery, New York and her work has featured in recent group exhibitions at Gallery Joe, Philadelphia (2015); and Inga Gallery, Tel Aviv (2015, 2014). Her work is included in the collection of the National Gallery of Art, Washington DC. Sharon Etgar lives and works in Tel Aviv. www.sharonetgar.com

Pauline O’Connell (b. Kilkenny, Ireland, 1971) studied at IADT, Dún Laoghaire from 1988 to 1993, Limerick School of Art & Design, LIT from 2011 to 2012 and is currently a PhD candidate at the University of Amsterdam’s School of Heritage, Memory and Material Culture. Her most recent exhibition, an outcome of a research residency at Leitrim Sculpture Centre, The Milk Well and The Tea Well, was exhibited at LSC Gallery and Roscommon Arts Centre (2015). O’Connell works between the rural uplands of north-east Kilkenny and The Netherlands. www.paulineoconnell.com

Eddie Rafferty (b. Northern Ireland) received a BA in Fine Art (Printmaking & Drawing) from the University of Ulster, Belfast and is currently Artscare Artist in Residence for the Armagh & Dugannon Area of Northern Ireland’s Southern Health and Social Care Trust (SHSCT), working with children and adults. He is based in St. Luke’s Hospital in Armagh. He has completed numerous residencies in South Africa (2002-11), including one at Weskoppies Forensic Hospital, Gauteng. A major exhibition of his work will take place at F.E. McWilliam Gallery & Studio in 2017. He lives and works in Banbridge, Co. Down.

Gerda Teljeur (b. The Netherlands, 1943) studied fine art at the Rijksacademie and IVKNO (now the Rietveld Academie) in Amsterdam before relocating to Ireland in 1967. Solo exhibitions include Like Life Itself: Diary Drawings 2010/11/12, Wexford Arts Centre (2013); and Lines, Layers and Light, Stone Gallery, Dublin (2010). Among numerous group shows, her work has recently featured in Modest Masters 1 and 2, Artes Foundation, Amsterdam and Bergen, The Netherlands (2016, 2015). Public collections include Wexford County Council, Bank of Ireland, and Faber-Castell, Germany. Gerda Teljeur lives and works in Wexford. www.gerdateljeur.com

Andrew Ward (b. Dublin, Ireland, 1971) studied Filmmaking and Photography at DIT Rathmines before moving to the United States in 1993 and establishing a career as an assistant director on feature films. Ward is a member of the Directors Guild of America and has worked on movies in the UK, Ireland, South Africa, Canada, the US and New Zealand. He lives and works in Los Angeles. www.andrewward.com

Tad Wiley (b. Massachusetts, USA, 1955) studied at Saint Lawrence University from 1974 to 1976 and earned a BFA in Painting from SUNY Purchase College of Art and Design in 1978. His first exhibition took place at The Drawing Centre, New York (1982), followed by a solo exhibition at Leslie Cecil Gallery on 72nd Street (1984). He shows regularly in galleries and museums in New York and other major cities throughout the US. A recipient of a Pollock-Krasner Foundation Grant and an Edward Albee Foundation Fellowship, he lives and works in New York City. www.tadwiley.com

Sabina Mac Mahon (b. Dublin, Ireland, 1985) graduated from NCAD with a BA (First Class Joint Honours) History of Art and Fine Art (Painting) in 2008 and an MA (Distinction) Museum Studies from the University of Leicester in 2015. Recent solo exhibitions include So Through The Singing Land He Passed, The LAB, Dublin (2016) and An Ulaid – South Down Society of Modern Art, Belfast Exposed and QSS Gallery, Belfast (2015). Group shows include There Are Little Kingdoms, Mermaid Arts Centre, Bray (2016); Soundings, Municipal Gallery, dlr LexIcon, Dún Laoghaire (2014); and False Memory Syndrome, TBG+S, Dublin (2013). Mac Mahon has completed residencies at DCC’s Albert Cottages (2014-15); DIT School of Art, Design & Printing (2013); The Guesthouse, Cork (2012); Cow House Studios, Wexford (2011) and is Curator-in-Residence 2017 at Solstice Arts Centre, Navan. She lives and works in Dublin. www.sabinamacmahon.com