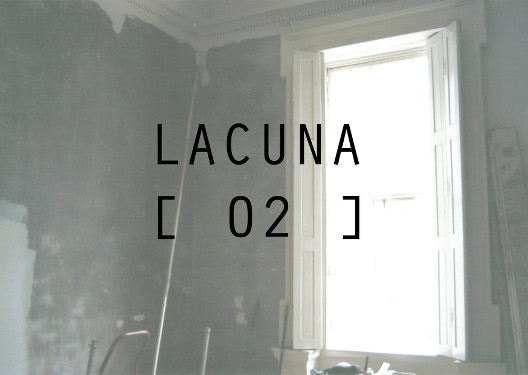 LACUNA [ ], the recently-inaugurated curatorial project at Taylor Galleries co-curated by David Quinn and Sabina Mac Mahon, returns for a second outing from 9 to 31 May 2014. Situated in the first floor exhibition spaces of the gallery at 16 Kildare Street, the occasional, on-going series of exhibitions runs alongside the gallery’s main programme and embraces experimental and enquiring practices in image- and object-making. When an empty space is encountered it can evoke a desire to fill it with something; to make it complete. In addressing this compulsion LACUNA [ ] both asks and answers the question, ‘With what?’.

Six artists have been invited to take part in the second iteration of the series, LACUNA [ 02 ]. Rather than asking them to respond to a theme, LACUNA [ 02 ] embraces the diversity of their current practices, processes and concerns, offering them a space in which to show new and recent work that encompasses sculpture, drawing, printmaking, installation, painting and photography.

Neil Carroll makes work that is centred around a painting process which consumes and amalgamates sculpture and installation to become expansive. It deals with painting elements such as ‘frame’, ‘perspective’ and ‘space’ but teases them apart, chasing them through their various manifestations. A structural core of architectural forms and materials more commonly found in construction are continually dismantled and reassembled, with each consecutive action based solely on its immediate predecessor. The unfolding of this symbiotic relationship encourages the work to develop. Avoiding conclusions, a series of multi-directional signs remain, devoid of axis but aspiring towards a repositioning of the figure in relation to the world.

Cora Cummins’ work broadly focuses on zones within the environment that are cut off from their surroundings by their own sets of rules and functions. She is particularly interested in spaces of isolation, retreat and contemplation – gardens, fairgrounds, huts, submarines, tree-houses – and all kinds of temporary communities and encampments; metaphorical, and sometimes literal, kinds of islands. Her most recent body of work sees memory, experience, unlikely historical fact and flights of fancy merge with references to local places, histories and memories (both public and personal) alongside an on-going fascination with how we perceive and define the landscape.

Sarah Jane Finnegan’srecent works have led to a body of research that is rooted in ideas and understandings of paradise. Her main interests focus on video and collage and she currently bases her practice in the area in which both mediums collide. Her work looks at how value is measured by associations. Imagery and material move between inherent and perceived value. Through the medium of photographic collage, she presents images of the typically precious and the typically ordinary, applying a principle of equivalence. By detaching association her work questions understandings of the aspiration attached to the communally constructed idea of classical perfection that is likened to an imagined and unattainable Utopia. She seeks to activate and question mass produced hopes and versions of paradise.

Gillian Lawler makes paintings that explore ideas concerning architectural unease, referencing imaginary, fictional landscapes that explore a dystopian science-fiction terrain. Her work highlights the peculiar aspects of contemporary architectural design, often exaggerated through heightened perspective, that leaves the viewer with a sense of sublimity laced with unease. Recurring motifs accentuate a definite but skewed anti-perspective, suggesting an homage to pre-Renaissance interior paintings. They are buildings that conceal ghostly inhabitants; wastelands suggestive of a vast and fragile future or past: a spatial, structural and psychological fluctuation within an urban framework.

Shane Murphy’swork is informed by phenomenological ideas of perception and explores the tacit integration between viewer and object. A keen appreciation of Minimalism supports his inquiry into light and architectural space. Working three-dimensionally through the process of expanded drawing, he develops a vocabulary of open form geometric sculptures through horizontal, vertical and diagonal lines. Subtly employing line as a medium, he demonstrates that a drawing is in fact a three-dimensional process demanding an embodied participation from the viewer in pedestrian space. This creates ambiguity surrounding the figure / ground relationship, whereby the virtual planes created conjure a sense of trompe l’oeil, like hallucinatory floating façades. It is this embodied sense of perception that is key to his work as it is the background to which everything else stands out.