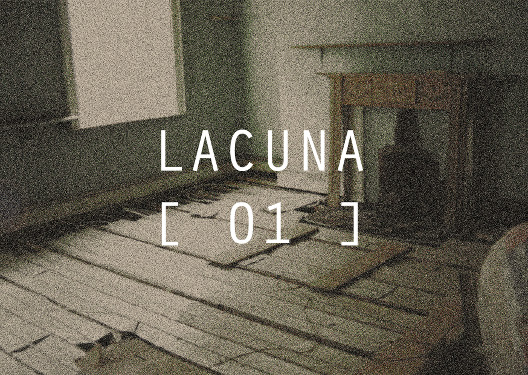 In Conversation event with artists and curators: 1pm, Saturday 23 November 2013

[1] an unfilled space; a gap, a missing portion: particularly in a manuscript, inscription, text,

[2] music an intentional, extended silence in a piece of music

[3] linguisitics a lexical gap in a language

[4] anatomy a cavity or depression, especially in bone

Lacuna [ ] is a new curatorial project at Taylor Galleries co-curated by David Quinn and Sabina Mac Mahon. Situated in the first floor exhibition spaces of the gallery at 16 Kildare Street, it is planned as an occasional and on-going series of exhibitions and publications that will run alongside the gallery’s main programme and embrace experimental and enquiring practices in image- and object-making. When an empty space is encountered it can evoke a desire to fill it with something; to make it complete. In addressing this compulsion Lacuna [ ] both asks and answers the question, ‘With what?’.

Six artists have been invited to take part in the first iteration of the series, Lacuna [01]. Rather than asking them to respond to a theme, Lacuna [01] embraces the diversity of their current practices, processes and concerns, offering them a space in which to show new and recent work that encompasses sculpture, drawing, installation, painting and photography.

Maggie Madden uses collected materials to construct fragile sculptural formations with geometric affinities that reference architectural structures, contemporary urban infrastuctures and communications networks. Her intensely detailed constructions have the potential for limitless expansion; to grow out from densely ordered space and continue boundlessly. Often using materials relating to construction, her work recontextualises mass-produced industrial materials that are transformed as they are handcrafted into new forms that often teeter on the brink of collapse.

Lucy Andrews also uses found objects and industrial materials to make seemingly impossible assemblages that appear to defy the laws of physics. Household liquids and containers – a fish tank, a wine glass, a beach ball – are separated from their original functions and reconfigured as sculptural objects that test the visual and physical properties of their component parts. She treats her materials as though they are active or in flux and presents the outcomes of her ‘precarious installations’ as though they are accidental occurrences rather than carefully measured and controlled experiments.

Eveleen Murphy’s paintings are the result of an intuitive process that relies on chance to produce small-scale chalky abstractions that are intended to simultaneously repulse and attract the viewer. Rather than setting out with a particular resolution in mind, she begins each painting unconscious of its outcome and allows the element of surprise to inform the decision-making process. The finished paintings are intentionally ill-disciplined and obviously handmade, the results of an idiosyncratic process that works through a language of painting that is simultaneously awkward and alluring.

Gwen Wilkinson uses an antique Gandolfi half-plate camera dating from the 1870s to produce 6½ x 4½ inch wet plate collodion photographs that are both technically complex and aesthetically beautiful, both as images and as objects. Invented in 1851, the collodion process produces one-off images on glass (ambrotypes) or tin (tintypes) plates. In her series Edifice and A Fine Balance she uses this seemingly out-dated process to explore the built heritage of rural Ireland and the ancient Japanese bonsai cultivation of kokedama (literally translated as ‘moss balls’) suspended on lengths of string.

Seán Molloy appropriates Baroque, Rococo, Neo-Classical and early 20th century figurative paintings in his quasi-allegorical work. In addition to these art historical references, his paintings also include elements taken from various photographic archives, notably the typologies of husband and wife team Bernd and Hilla Becher. He subverts the traditional image and painterly form of his reference materials through the introduction of optical devices – Ben-day dots, pixels, compressed parallel lines – that refer to mechanised image-making techniques. As a result, the surfaces of his paintings are uncertain, leaving the viewer confused about where their focus should lie.

Helen O’Leary’s work refers to a different art history – her own. Her current practice investigates the history of her work as a painter, with subject matter and materials drawn from the ruins and failures of her studio. She excavates the detritus of canvases, stretchers, timber frames and fragments of paint and reassembles them to form new sculptural forms in an act of invention-through-need that references her rural childhood on a farm in Wexford. As a result, her interest in the wider history of painting – its rules, beauties and techniques – and her own painting practice are transformed and transfigured in an act of continual regeneration.

Lucy Andrews (b. Stoke-on-Trent, England, 1978) graduated from NCAD with a 1st Class Joint Honours (BA) in History of Art and Fine Art (Sculpture) in 2011. Recent exhibitions include The Modelled Conscious, RUA RED, South Dublin Arts Centre (2013); Tentamen, 13 North Great George’s Street, Dublin; Sam Keogh and Lucy Andrews, The Model, Sligo; Futures 12, Royal Hibernian Academy, Dublin; A MacGuffin and Some Other Things, Project Arts Centre, Dublin; As Above, So Below, 126, Galway; and Transistive Relationships, Limerick City Gallery of Art (2012). In 2010 Andews received an Erasmus Scholarship to attend the University of Applied Arts, Vienna and in 2012 she was selected as the recipient of the inaugural Graduate Award at Temple Bar Gallery + Studios, Dublin. In July 2013 she received a one-year Project Studio at TBG+S and she currently lives and works in Dublin. www.lucyandrews.net

Maggie Madden (b. Connemara, Co. Galway, 1976) completed a BA in Fine Art (Painting) at Limerick School of Art & Design in 1998 and received an MFA in Painting from NCAD in 2006. Solo exhibitions include Site Line, The LAB, Dublin (2012); and Fading Not Ending, Roscommon Arts Centre, Roscommon (2010). Recent group exhibitions include the 132nd RUA Annual Exhibition, Ulster Museum, Belfast; Sluice Art Fair, London (with Jim Ricks Projects); Claremorris Open Exhibition, Mayo; What has been shall always never be again, Ormston House, Limerick; and Nailing Jelly to the Wall, Monster Truck at Catalyst Arts, Belfast (2013). In 2013 she was accepted onto the Viewing Program at The Drawing Centre, New York. She has completed residencies at the Atlanic Centre for the Arts, Florida (2011); Draíocht Arts Centre, Dublin (2007); and Artist’s Colony, Ciudad Colon, Costa Rica (2001). Maggie Madden lives and works in Dublin. www.maggiemadden.com

Seán Molloy (b. Morcecambe, Lancashire) studied in the UK at the University of Brighton and Glasgow School of Art before graduating from NCAD with a 1st Class BA (Hons) in Fine Art (Painting) in 2011 and an MFA in 2013. Recent exhibitions include the 183rd Annual Exhibition, Royal Hibernian Academy, Dublin; Kilkenny Arts Festival Exhibition, Jonathan Swift Gallery, Kilkenny; Anonyme Zeichner, Temporary Art Centre (TAC), The Netherlands and Kunsteverin Tiergarten Galerie Nord, Belin (2013), RDS Student Art Awards Exhibition, Dublin; Claremorris Open Exhibition, Mayo; and the Winter Open at RUA RED, South Dublin Arts Centre (2011). In 2012 Molloy completed a commission for CIT Aerospace International’s Irish headquarters in the IFSC and in 2013 he was longlisted for the Saatchi New Sensations Prize. Seán Molloy’s work is included in the State Art / OPW Collection and he lives and works in Dublin. www.seanmolloy.ie

Helen O’Leary (b. Wexford, Ireland, 1961) studied at NCAD from 1982 to 1985 before moving to the USA and completing a BFA at the School of the Art Institute of Chicago in 1987, followed by an MFA in 1989. Recent solo exhibitions include Refusal, Wexford Arts Centre, Wexford; Irregular Activity, Catherine Hammond Gallery, Cork (2013), The shape of disappointment, Butler Gallery, Kilkenny; Grand, Custom House Studios, Mayo (2012); where things settle, Colemanburke Gallery, New York (2011) and Centre Culturel Irlandais, Paris, France (2010); things you do, Beverley Arts Centre, Chicago (2009). She has received a John Simon Guggenheim Fellowship (2010-11), Joan Mitchell Foundation Award for Painting & Sculpture (2000), and Pollock-Krasner Foundation Awards (1996, 1989). Public collections include the Department of Foreign Affairs, Bank of Ireland and the State Art / OPW Collection. O’Leary has taught at Penn State University’s School of Visual Arts since 1991, becoming a Professor at the college in 2006. She lives and works between Pennsylvania, USA and Leitrim. www.helenoleary.com

Gwen Wilkinson received a BA in History & Legal science at University College Galway in 1993 before developing a professional interest in photography and returning to college to study for an MFA in Fine Art (Media) at NCAD from 2011 to 2013. Solo exhibitions include Edifice, The Norman Gallery, Wexford (2011); and Platform 059, Éigse Carlow Arts Festival (2007). Recent group shows include the RDS Student Art Awards Exhibition, Luan Gallery, Athlone and RDS, Dublin; Kilkenny Arts Festival Exhibition, Jonathan Swift Gallery, Kilkenny (2013); Chasing Shadows III, Centre for Creative Practices, Dublin; Nine Stones Artists, Éigse Carlow Arts Festival; OAK, Killenure Castle, Tipperary; Chasing Shadows II, Profile Gallery, Saltburn-on-Sea, England (2012); and Chasing Shadows, Centre for Creative Practices, Dublin (2011). In 2013 Wilkinson was shortlisted for Fire’s Propeller Award and in 2011 she received the Golden Fleece Award. She is a member of 9 Stones Artists, an artist group based in the foothills of the Blackstairs Mountains in South Carlow where she lives and works. www.gwenwilkinson.com

Sabina Mac Mahon (b. Dublin, Ireland, 1985) graduated from NCAD with a 1st Class joint honours (BA) in History of Art and Fine Art (Painting) in 2008 and is currently studying for an MA in Museum Studies at the University of Leicester. Solo exhibitions include A Story about the History of Dún Laoghaire: The Private Collection of Eileen Champion Poole, Dún Laoghaire-Rathdown County Hall (2013); Longevity, if not immortality, Garter Lane Arts Centre, Waterford (2012) and Droichead Arts Centre, Louth (2011); Soft murder; appropriate to a sad, frightened time, Ballina Arts Centre, Mayo (2011); and The Transport of the Holy House of Loreto, The Joinery, Dublin (2010). Recent group shows include False Memory Syndrome, Temple Bar Gallery + Studios, Dublin; and Handjob by Alan Phelan, Oonagh Young Gallery, Dublin (2013). In 2012 she received dlr Arts’ inaugural Concourse Award and in 2013 was selected for a Summer Project Studio at DIT’s School of Art, Design & Printing. Other residencies include The Guesthouse, Cork (2012) and Cow House Studios, Wexford (2011). www.sabinamacmahon.com