Klara Lidén: The Myth of Progress 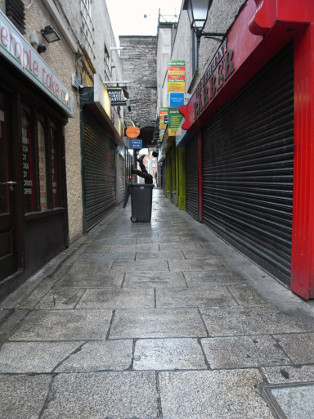 IMMA presents the first solo exhibition in Ireland by Swedish-born artist Klara Lidén, featuring a selection of her Poster Paintings, accompanied by a film work. Central to the exhibition are Lidén’s recent Untitled (Poster Paintings), 2010–11; objects comprising layers of advertising posters removed by the artist from city streets, to which she has added a top coating of white paint. The Poster Paintings archive the advertisements that intersperse, and increasingly encroach upon, urban life. Simultaneously reflecting on the waste inherent in consumerism and on societal values, while harnessing the possibilities of the materials employed, they engage the viewer and ultimately allow for an open-ended dialogue with the work. In this body of work, as in much of her practice, Lidén’s aim is to ‘divert materials or spaces from their prescribed functions, inventing ways of making these things improper again’. In this way, her work reveals the creative potential and rebellion that lies just beneath the surface of our cities and their individual occupants.

Lidén directly engages with the fabric of the cities she encounters, adapting the physical and psychological boundaries of the public and private spaces we inhabit to her own ends in the creation of refreshingly intimate environments. Her preoccupation with urban planning, which stems from her architectural training, frequently manifests itself in built constructions, into which she may incorporate video or sound work. She describes these structures as ‘un-building, re-cycling or improvising new uses for what’s already been set up.’ Through a combination of social activism, performance actions, large-scale installations, and film works drawing on a history of performance art and conceptual work, Lidén’s resourceful and emotionally loaded body of work demonstrates how an individual can navigate a constantly evolving metropolitan landscape and generate creative environments to conceive new and alternative ways of living.

Previous projects include building a concealed dwelling out of waste material on the river Spree in Berlin and operating an alternative, free postal service in Stockholm. Paralyzed (2003), involved the artist performing a frantic, uninhibited dance amongst the passengers of a commuter train, allowing her body to reveal her hidden accumulated aggression. For her 2007 exhibition at Moderna Museet the artist presented the installation Unheimlich Manoeuvre which involved building a structure from the contents of her 30sqm flat.

Klara Lidén was born in 1979 in Stockholm, Sweden. Solo exhibitions include Bodies of Society, New Museum, New York (2012); Moderna Museet, Stockholm (2011; and Unheimlich Manoeuvre, 2007) and Serpentine Gallery, London (2010). In 2011 Lidén received a special mention from the jury of the 54th Venice Biennale and her work Teenage Room was presented as part of the exhibition in the Danish and Nordic Pavilions at the 53rd International Art Exhibition of the Venice Biennale in 2009. In 2008 she took part in the Sydney Biennale, Sydney.

The exhibition will be accompanied by a publication containing texts by curator Vaari Claffey, Rachael Thomas and Karen Sweeney.