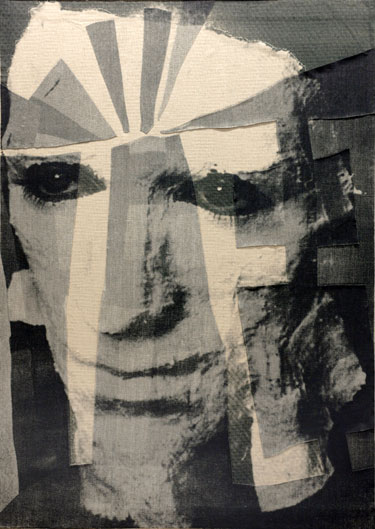 All was dark and silent, the black shadows thrown by the moonlight seeming full of a silent mystery of their own. Not a thing seemed to be stirring, but all to be grim and fixed as death or fate; so that a thin streak of white mist, that crept with almost imperceptible slowness across the grass towards the house, seemed to have a sentience and a vitality of its own.

King Rat is an environment of art. Each artist and artwork inhabits their own universe of complications, with form and aesthetics resting easily beside history, context and imagination. Within the entanglement of art and nightmare, shadows form amidst a prevailing sense of unease. Beauty, intrigue and formal abstraction rest against an intangible performative presence, where the possibility of horror and violence enters the room through allusions to folklore, superstition, ghost-stories and the shifty appropriation of culture. Absent from the scene is that most blood-thirsty of characters – replaced instead by an entangled giant – the writhing, breathing King Rat*.

Here a black-as-night landscape (Heman Chong) is spread out across the floor, whose shifting papers rustle underfoot. Out of this stage climb plinths and sculptures – characters, models and abstract forms. The sculptures, wall paintings, tapestries and paintings are momentarily frozen in time and, as you glance away, continue their secret motion. Curling clouds of smoke drift along the wall (Pae White) and dead, destroyed sails catch the wind, while Fernando Pessoa and Alistair Crowley quietly commune (Matthias Bitzer). The semi-transparent, seemingly celluloid frames that have been trapped and layered on top of each other continue their flash-frame loops (David Noonan) while patterns and markings familiar to indigenous New Zealand Maori morph into a large ampersand (Joseph Churchwood & David Bennewith). The tapestry continues its happy animation, the balls fall (Isabel Nolan), and like the many-headed rat made famous by superstition and mythology, the artworks’ performances mess with each others’ meaning, autonomy and precariousness.

* There are very few recorded examples of ‘rat kings’ in the world, but it is an extraordinary yet natural phenomenon. When a litter of young rats are in the nest, their tails can occasionally become intertwined and ensnared in materials such as horse hair, twine or dried blood, trapping them in a mass formation of bodies growing amongst the interlocked throng of tails. Growing heavier over years, and reliant on feeding from parents, the King Rat is known to have crashed through a ceiling, indicating irrefutably the presence of witches in the home, or the harbinger of disease.

** Text excerpts are from Mina Harker’s Journal in Dracula by Bram Stoker. In this instance, the writing has been sampled from the Four Corners Books publication (‘Four Corners Familiars’) 2008, p. 343-5, illustrated by James Pyman. The first edition of Dracula was published by Archibald Constable and Company in 1897.

With thanks to the artists and lenders, Galerie Iris Kadel, Karlsruhe, 1301PE, Los Angeles, Kerlin Gallery, Dublin and HOTEL, London. Thanks also to the Goethe Institut Dublin for supporting King Rat.