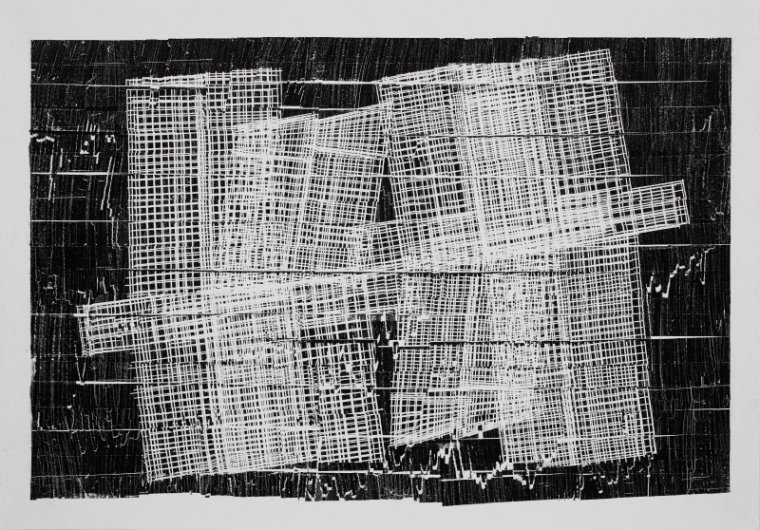 Julie Merriman’s practice is centred on the language of drawing and how it is used to visually describe structure, place, concept and theory. Working from archival material she explores the various conventions of drawing used in construction and design. Merriman investigates how drawing is employed in these contexts as a technology to impart specific information in subjects such as architecture, engineering, science, cartography and mathematics. She is interested in the methodologies and conventions of these drafting professions, but through her creative process the artist reveals the hidden potential of a different aesthetic contained within the drawings.

Revisions is the culmination of a year-long engagement within Dublin City Council departments, meeting with staff in Housing, Architects and Engineering who draw or read drawings as part of their everyday work. Merriman looked at project drawings and had conversations with staff around the role of drawing within the City Council, and how the drawings, old and new, are used, handled and stored. The impact of computer aided design programmes, which rendered manual and older mechanical drawing methods obsolete, was also considered and evaluated.

After viewing the archives in both Engineering and Housing Maintenance, she began working with typewriter carbon film, discovering that it is a medium that creates a ‘slippage’ in the drawing information. Pinned to a paper or canvas surface and drawn upon, these 16mm wide lengths of carbon film exert a controlling force on the drawing process. Under these restrictions the artist allows the artwork to emerge. Merriman is interested in the constraints and frustrations involved in setting up a procedure to produce a drawing that inevitably goes awry. There is an uncertainty to the outcome in the drawing process but also expectation and surprise when the carbon film strips are removed and the finished drawing contains unexpected marks and nuances that transfigure its original function. The visual language of the engineer and architect is still present but its functionality has been disrupted and the potential now exists for new perspectives to emerge.

A fully illustrated publication with essays by Stephanie Straine and Marianne O’Kane Boal is available in the gallery bookshop from 11 February.

Revisions is part of Interaction with the City, the second strand of the Dublin City Public Art Programme, and is funded from the Per Cent for Art Scheme through the Department of the Environment, Community and Local Government.