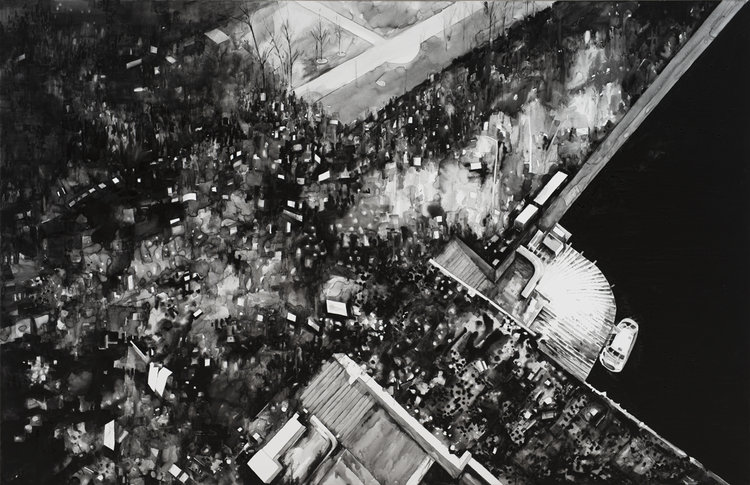 A Free Bus will run between Belfast and Portadown on the evening of the opening. Leaves Belfast from Golden Thread Gallery at 6.45pm. Returns from Portadown at 9pm.

What happens when democratic processes express, even produce, social and political divisions?  How are the outcomes of such processes – sometimes only narrowly won – resisted and critiqued?  How moreover, do such processes make use of visual-cultural means to, as the writer Rebecca Solnit puts it: ‘make injury visible’?  As a spectacle of resistance, public protest has a long history, but persists as a powerful form of expression in a time of conflict and instant, ‘citizen enabled’ global media.

Drawing on over a decade of image-making and research on themes of protest and urban space, Irish artist Joy Gerrard archives and painstakingly remakes media-borne crowd images from around the world.  Her Millennium Court Arts Centre exhibition marks the latest development in this project, presenting an abstract film work alongside monochrome paintings and drawings of the Arab risings of 2011, anti-Trump demonstrations and ‘Black Lives Matter’ protests from 2016. Her crowds are viewed from above, suggesting the remove of media observation, while the fluidity and drama of their moment is expressed through precise, expressive mark-making. The large paintings allow a shift in scale, disrupting the photographic schema of the smaller drawings, thus allowing greater freedom from the original mediation of the image. These are set alongside the film ‘shot crowd’, produced as a small maquette in 2007 and remade in 2016. Here, Gerrard sets the historical specificity of her protest images against an abstract depiction of space and human movement. The perpetual flow of individual objects, apparently random and chaotic, is constrained and directed within a built environment.

The elemental simplicity of Gerrard’s Japanese ink drawings and paintings belies a more complex meditation on the contemporary circulation of images, the precarious freedom of protest and the contemporary relation between populism and representative democracy. In her work, the figure of the crowd comes to suggest the expression of collective agency. But these crowds are persistently contained within historical architectures that at once give them form and constrain them.  The ephemeral imagery of news media is thus figured against more fundamental and enduring human conditions, while the rescaling of images into dramatic, painterly forms disrupts their everyday meaning to provoke reflection on the place of art, witnessing and the politics of representation.