Jonathan Mayhew: I Wanted to Write a Poem 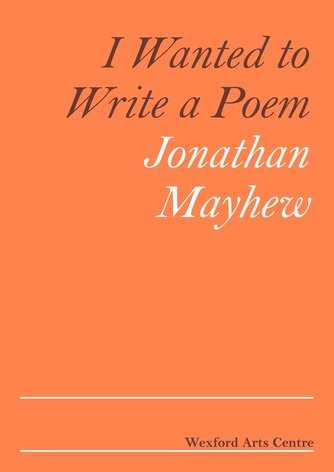 ​Wexford County Council and Wexford Arts Centre are pleased to present I Wanted to Write a Poem, a new exhibition of work by Jonathan Mayhew, winner of the Emerging Visual Artist Award 2015.

The Emerging Visual Artist Award is a joint initiative between the Arts Council, Wexford County Council and Wexford Arts Centre which acknowledges and supports the development of committed visual artists in Ireland, providing funding to produce and exhibit a body of work.

The truth is, I didn’t imagine it this way. I wanted to write a poem but all this happened instead.

Not too long ago I was staring out the window at the sea, I couldn’t hear it, but I knew its sound. I’ve known what it sounds like for decades, but waves have crashed against the rocks for longer than I can imagine. Each time water and stone meet the world is changed in some small way. We lose track of the tiny changes as it becomes atomised. It happens so slowly that we don’t really notice. Water, like DNA, holds vast amounts of information; the whole history of the world could potentially be contained in a single drop. But whether it’s in a glass, the sea or a vase with flowers, to us it just looks like water. I thought my external hard drives held a lot of information, but its nothing compared to the possibility of water. We break down information in other ways. 1s and 0s. Another kind of DNA. Like water it flows in streams around us. When we use technology the world appears again. Machines are like a reflection for the things I cannot remember or have forgotten or maybe don’t know yet. We’re watching as the world turns. Information flows in from many directions simultaneously. It’s an uncomfortable realisation that we live in a time were alternate facts and post-truths are not just works of fiction. Perhaps the truth depends on a walk by the sea. It was just a day like any other. Light broke and its edges were sharp.

The truth is, I didn’t imagine it this way. I wanted to write a poem but all this happened instead.

The work of Jonathan Mayhew intertwines the poetic with post-conceptual practices. Through his interest in poetry, literature and technology, Mayhew manipulates physical and invisible materials to contemplate pockets of daily life.​

The title of the exhibition is borrowed from a collection of interviews with poet William Carlos Williams. At 73 years old, Williams held a series of informal conversations which were sorted and compiled in a small book. Through the interviews, William did not elaborate on how he wrote his poems, their meanings or in which context they stand as he did not want to spoil the way people read his work. Similarly, the works in this exhibition, like brief conversations, are left for people to find, eavesdrop in and engage with. Asking, not what are you looking at, rather, what is it you’re seeing or not?

Metadata, information that describes other information, is also a means by which the complexity of an object is represented in a simpler form. Mayhew compares this process to poetry, where words are broken down into simpler forms but can still convey complexity. Poetry is an economic way of communication, finding the most concise way to say or ask something. Working with objects that already exist and shifting them slightly, Mayhew explores these thoughts through the physical and non-physical forms such as USB sticks, vases, portraits, photographs, clocks, discarded books, sound and words. These combined materials overcome their usual functions, implying that things are not always as they seem. Photographs that aren’t photographs, portraits that aren’t portraits, and objects that may seem familiar contain vastly different things inside.

One such work is ‘This is water’ a series USB infused vases. Vases function as containers, from displaying flowers and holding liquids, and are made up of different clays and materials with invisible histories. They can all look very different but still contain similar information/material or can look the same but hold many different things. USB flash drives are holders of various information like a vase, the contents of which are left open as a proposition to be discussed, rather than objects with a fixed meaning.

Jonathan Mayhew is currently living and working between Dublin and Risør, Norway. Mayhew received a Bachelor’s Degree in Fine Art Painting from the National College of Art & Design in 2005 and later continued to the MFA program, graduating in 2007. His work has been extensively exhibited throughout Ireland and Europe including The Irish Museum of Modern Art, Dublin; Five Years, London; Visual, Carlow; Farmleigh, Dublin; FLOOD, Dublin; The Black Mariah, Cork; and America in DAC Gallery, Los Angeles; and SFMOMA, San Francisco. He is currently showing as part of the Sørlandsutstilling 2017 in Kristiansand Kunsthall, Norway.