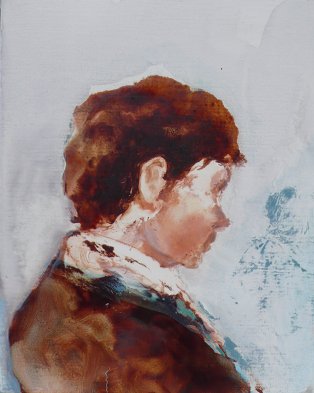 Tenebrae, the Latin word for shadows or darkness, refers to a Holy Week ceremony in which fifteen candles are placed on a special candelabra known as a ‘hearse’ and are gradually extinguished one-by-one, leaving the church in darkness. The last candle is hidden beneath the altar, ending the service in total darkness. The strepitus, the Latin word meaning great noise, is made by slamming a book shut, symbolizing the earthquake that followed Christ’s death. Following the great noise, the candle which had been hidden from view is returned to the top of the hearse, signifying the return of Christ to the world with the Resurrection. On Good Friday, April 10, 1903, James Joyce attended mass in Notre Dame, Paris. He was interested in comparing the French style of Tenebrae to the Irish tradition. When he returned to his hotel, there was a telegram waiting for him which read: “Mother dying, come home. Father”. The paintings in this exhibition are a response to the fifteen stories that Joyce began shortly afterwards that became the collection Dubliners.