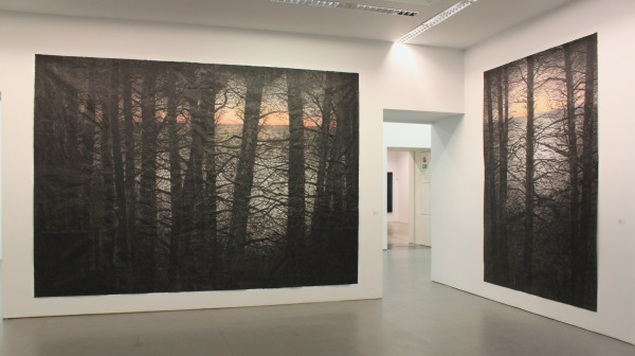 Limerick’s rich heritage in the Arts and Visual arts, and its abundant tradition of painting, is well acknowledged nationally. The vision for “Artists Rooms” was to distil an essence of this, and exhibit the current practice of two Limerick Contemporary Visual Artists – my curatorial approach was to work on the idea of artistic immersion and within the parameters of the galleries in Limerick City Gallery of Art in play, this allowed me to select two Artists – Michael Canning and Gillian Kenny. What I envisaged was ‘one idea, separate exhibitions, separate spaces.’

When I first contacted Michael Canning, he immediately felt the concept, along with dimensions and shape of the space in the Gallery, would work with ideas he had been resolving for the past while, which were taking his work in the studio in quite a new direction. These ideas at their heart involved producing a finished installation especially for this particular gallery space, and so, these large new pieces are the result of months of intense and full immersion. Strong, imposing and physical, there is a rawness and energy to these works on paper, which, when viewed as objects in themselves, betray Michael’s strong sculptural instincts.

Gillian Kenny’s works on exhibition here, are a selection largely made from pieces she has produced in the past year 2014; intimate and thought-provoking, they are reflective of a new, in-process phase, which fall into context in her current body of work. Recent experiences, including early motherhood, have invited deep contemplation of the whole life cycle to become manifest in her works. The quiet, sensitive tones of the small drawings on paper are contrasted with confident and vibrant colours in the larger canvases; together these are very much the result of an artist commenting on where she is at in life.

In presenting these 2 artists, Limerick’s year as City of Culture is brought home – perhaps to book end a remarkable year with Limerick’s own, but also to suggest, as this exhibition goes on into the new year 2015, that Limerick’s cultural gatekeepers’ need no invitation to continue what they’ve always done.

Ailbhe Barrett is a print maker and curator who lives and works in Limerick and Dublin.

Gillian Kenny lives and works in Limerick. She attended Limerick School of Art and Design, and completed a Masters in Fine in Belfast. She was awared the Countess MArkievicz Medal for painting in 2000. She has received awards from the Arts COUncil of Ireland, including an award for travel in Mexico in 2005. Kenny has exhibited her paintings nationally and internationally for many years, including Limerick City Gallery of Art, the Hunt Museum Limerick. The Belltable, Limerick, Droichead Arts Centre, Drogheda, the Molesworth Gallery Dublin, The Lab, Dublin, Spectrum Fine Art, London, The Phatory, NewYOrk and the Engine Room, Toronto. Her paintings focus on the dialectics arising through the use of photographic language in painting, described by Irish Times critic Aidan Dunne as ‘crisply and expertly painted’.

Michael Canning was born in Limerick in 1971. After studying at the Limerick School of Art and Design he studied in Greece at the School of Fine Arts in Athens 1992-1993 and in 1999, he received his Masters Degree in Fine Art from the National College of Art & Design in Dublin. Michael Canning’s paintings confront certain traditions of northern European painting. Neither landscapes, nor still-lifes, they convey an atmospheric quality laden with spiritual undertones. Michael has exhibited extensively throughout Ireland and The UK. His work is included in several private and public collections including: AIB, McCann Erickson, AXA, Butler Gallery, University of Limerick, OPW Ireland. He won the Hennessy Craig Scholarship in 2003 & the Fergus O’Ryan Memorial Award in 2006, both at the RHA, Dublin.