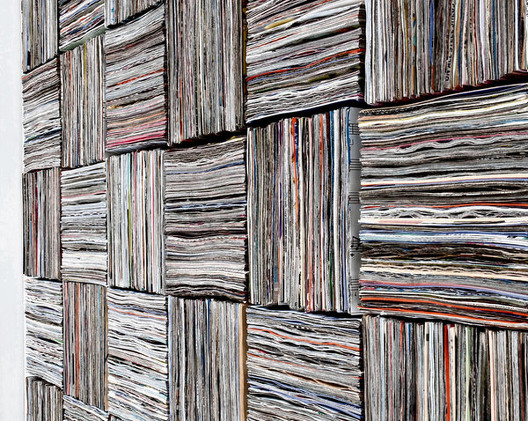 Pairing veteran painter John Kingerlee with the emerging artist Colin O’Connor this exhibition features works in paper from both artists.

Born in Birmingham in 1936, John Kingerlee has been based in West Cork since 1982, settling first on the Beara peninsula and, more recently, in Skibbereen. He has exhibited widely in Europe and America, where his solo shows have included those at the AFP Galleries in New York in 2007 and the Museum of the Southwest in Midland, Texas in 2009. He is the subject of a book, The Whole Planet is a Garden, edited by the late American art critic, Ted Pillsbury.

Kingerlee is best known for his Grids paintings. His work for the Layers & Layers exhibition will include paintings and collages on paper. Kingerlee will be 78 on February 14.

Colin O’Connor is a young artist from Cork who graduated from the CIT Crawford College of Art and Design in 2012. His work largely involves layering paper to create patterned sculptural works.O’Connor’s recent exhibitions include the group shows Prelude Speaker: Contemporary Castletown (a partnership between Crawford Art Gallery and the Office of Public Works).and the Art of the State Exhibition 2013: Encounters with the Department of Finance and Personnel in Northern Ireland and the OPW in the Republic of Ireland.

O’Connor will be artist-in-residence at the CIT Wandesford Quay Gallery for the duration of the Layers & Layers exhibition, working in part of the gallery in a pop-up studio. He will also create an installation in the gallery’s unique vault spaces over the course of the exhibition, this will be launched Thursday, February 27.

Events taking place throughout the duration of the exhibition:

Panel discussion on the work of John Kingerlee, Wednesday, February 19

Kids clubs Saturdays at 3pm, February 15, February 22 & March 1 (children must be accompanied at all times)