John Jones: We Exercise the Power… 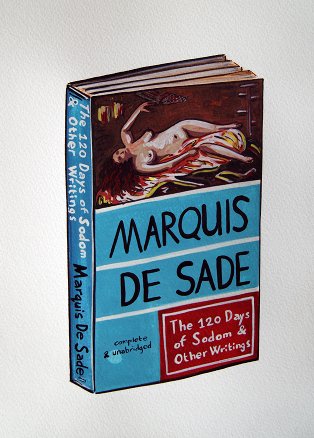 Cork County Library and Arts service is exhibiting a selection of work from John Jones’s project entitled “We Exercise the Power”. This project comprising of watercolour paintings of 100 books by 100 authors who have been at one time or another banned in Ireland.

John Jones been working on this project for the last six months through regular visits to the Irish Censorship Office to view the official Register of books banned in Ireland under the Censorship of Publications Act of 1930. When a book was deemed unfit for Irish readers due either to themes of general indecency, obscenities, religious views, the issue of abortion or for other reasons, it would automatically be prohibited for twelve years by the Board. When the twelve years passed the Board could then reconsider the book and prohibit it again for a further twelve years. In this way some authors found their books being banned over and over again by the Board. The censorship of authors and books was particularly severe in Ireland, a country greatly influenced by the Catholic Church and the Board would not think twice about banning any author’s work that dared point the finger at the Catholic Church. In 2010, we saw for the first time no new books banned in Ireland after the twelve-year ban was lifted on a number of books.

To view the full list of 100 banned books visit: johnjonesartist.blogspot.com