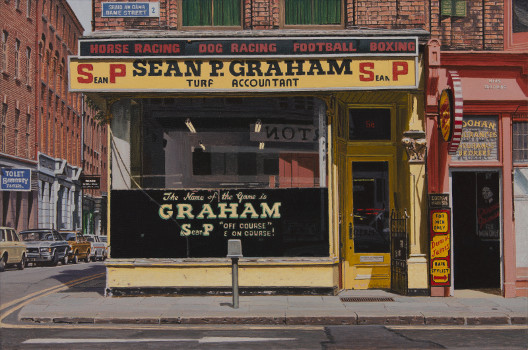 Taylor Galleries is delighted to present Recent Paintings, an exhibition of new work by Cork-based artist John Doherty that runs from 26 April to 18 May 2013. Recent Paintings is Doherty’s 11th solo exhibition with the gallery, which celebrates its 35th anniversary in 2013.

The exhibition is comprised of a new series of paintings on canvas and smaller works on board that feature the artist’s favourite leitmotifs – buoys, shop fronts and petrol pumps – which reappear frequently in his work. Although the subject matter of much of John Doherty’s work belongs to the forlorn and crumbling remains of an Ireland that, though familiar, has been consigned to history, his realism is immediately attractive for its apparently benign normality. The abandoned corner shops and bars, the rusting petrol pumps, rotting boats and disused oil drums seem harmless enough, but upon closer inspection they assume a dark humour. Doherty’s images, coupled with the wry wit of their titles, point towards the human stories that exist behind the facades of places and things inhabited and used countless times over the years. Rendered in an incredibly skilled acrylic photo-realism, his paintings make the different country of the past seem both tangible and real.

John Doherty was born in Kilkenny in 1949 and studied architecture at Bolton Street College of Technology, Dublin from 1968 to 1973 before moving to Sydney and deciding to pursue a career as an artist. Until recently Doherty has divided his time between Australia and Ireland and he now spends much of his time in Cork. He completed a residency at the National College of Art in Papua New Guinea in 1979 and since then he has shown his work widely in both Ireland and Australia, with solo exhibitions at Australian Galleries, Sydney and Melbourne; Contemporary Diversity, Cork; and the Louis K. Meisel Gallery, New York. He has also exhibited regularly in the Royal Hibernian Academy’s Annual Exhibition. Doherty’s work is represented in private collections in Ireland, Australia, America and Europe, and included in the public collections of the National Gallery of Victoria, Melbourne; Institute of Modern Art, Chicago; the Irish National Stud, AIB Dublin and London; and Artbank, Sydney.