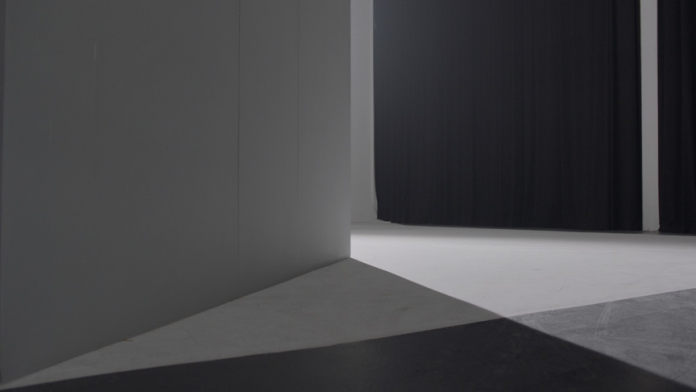 The exhibition Reconstructing Mondrian is a new body of work produced and directed by the artist John Beattie between 2013 – 2022. The installation features a cinematic moving image projection, with a new series of hand printed large format photographs. The central focus of this work is based on his filming of the reconstructed studio of Piet Mondrian’s Paris studio from 1921-1936, built by the Dutch architect Frans Postma, the founding Director of STichting reconstructie Atelier Mondriaan (STAM).

During the work’s evolution, Beattie invited Hugh Lane Gallery to view its development. For the artist, this cultural institution was critically and conceptually important for the reason that the HLG holds the permanent studio of Francis Bacon. The contrasting relationship between Francis Bacon’s permanent studio to that of Beattie’s cinematic and moving-image reconstruction of Piet Mondrian’s studio opens up the narrative between both spaces – how art historical myths are represented within the frame of a museum.

Beattie’s art practice takes the form of still and moving-image staged productions. Through a critical lens, he examines and re-presents historical events and narratives in a way that reveals, or makes visible, often unseen or unknown aspects. Through montage, and layering of historical representations and time-frames, the work offers new perspectives on familiar subjects.

The Artist’s Studio is a practical and functional space, and for Beattie’s work, the studio embodies conceptual and philosophical value. For two decades, Beattie’s interests have centred on interrogating the traditional ideal of the artist, and this mythic place of creation.

“Beattie’s intention is to explore the meaning and value of this utopian space of high modernism interrogating the construction of myth in our collective memories.”
– Michael Dempsey

A fully illustrated publication will be produced to document this exhibition. Reconstructing Mondrian will be accompanied by an exciting and diverse education programme. Please see visit our Explore & Learn section for details.

John Beattie is a visual artist, originally from Co. Donegal, currently based in Dublin. He has exhibited widely nationally and internationally. Beattie has been awarded a number of residencies to date, including the Centre Culturel Irlandais, Paris, 2020; the apexart Fellowship, New York, 2015; IMMA, Dublin, 2011; Temple Bar Gallery & Studio, Dublin, 2010; the RHA, Dublin, 2010; and Fire Station Artists’ Studios, Dublin, 2006- 2009. Currently, he is artist in residence at the National Archives of Ireland as part of the State Decade of Centenaries Programme 2021-2023.

Reconstructing Mondrian was funded by The Arts Council of Ireland Project and Bursary Awards.