John Beattie: An Artist, The Studio, and all the rest… 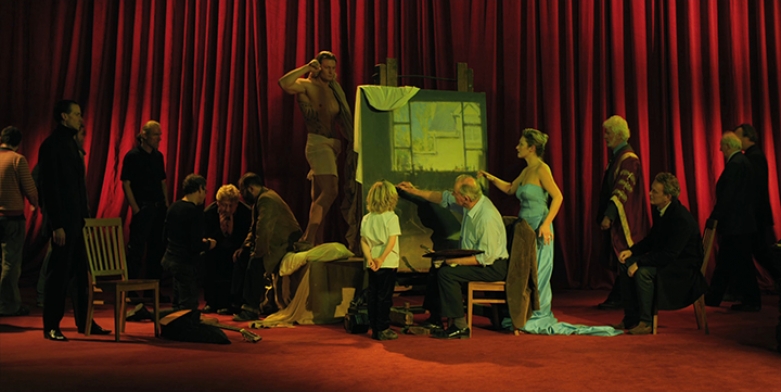 Thomas Ryan was president of the RHA from 1982 to 1992 during his tenure he drove the completion of the RHA Building on Ely Place and oversaw the first Annual Exhibition in the Academy’s new home. The RHA is forever indebted to him for this achievement and all of the other gifts he brought to his role as President and Member.

This work by John Beattie was first shown in the RHA in 2012 and we now represent it in tribute to Thomas Ryan.

An Artist, The Studio, and all the rest… takes the form of two beautifully crafted HD film projections with sound produced and directed by John Beattie over a period from 2006 to 2012.

Beattie explores the relationship between traditional academic ideas of the artist and their practice and contemporary approaches to art making.  Beattie’s work raises complex questions as to how we, on the other side of the 20th century experimentation, may integrate and value the traditional. To commence this research he approached Thomas Ryan, a past president of the RHA, and they created a Master/Apprentice collaboration. The first film is shot in Ryan’s studio and is a meditation on the craft and methodologies employed by an artist working in the academic vein.

For the second film, Beattie appropriated Gustav Courbet’s The Artist’s Studio, 1854/55, and staged a recreation of the image in The Great Hall, at the Irish Museum of Modern Art. For the tableaux he invited artists, and representatives of the cultural institutions in Ireland to pose for this carefully choreographed re-staging.  It is a theatrical and thought-provoking spectacle on how one unpicks and understands the creative process.

The artist would like to acknowledge the assistance of the Arts Council / An Chomhairle Ealaíon in the making of this work. Also, the Royal Hibernian Academy, the Artist in Residence Programme at IMMA, the Office of Public Works, Fire Station Studios, the cast and crew, and the Ryan family.

An Artist, The Studio, and all the rest… Part 2, edition no.1 of 3, was acquired by The Arts Council of Ireland Collection in 2020.

“I am very grateful to Tom, “Sir Ryan” as I liked to call him, for allowing me to enter his home, studio, life, and work. Over those 6 years we became close friends. It was a pleasure”. John Beattie, Oct 2021.

John Beattie is a visual artist based in Dublin. Beattie’s practice takes the form of still and moving-image staged productions. His work re-addresses cultural narratives and events that reconstructs the malleable medium of time. He has exhibited widely nationally and internationally, and is currently working towards his solo exhibition Reconstructing Mondrian at the Hugh Lane Gallery, Dublin. Beattie has been awarded numerous Artist in Residence programs such as at The Centre Culturel Irlandais, Paris; the apexart Fellowship, New York; The Irish Museum of Modern Art, Dublin; Fire Station Artists’ Studios, Dublin; the Royal Hibernian Academy, Dublin; Temple Bar Gallery & Studios, Dublin; and is currently Artist in Residence at the National Archives of Ireland as part of the Decade of Centenaries Programme.

His work has been supported and acknowledged through project and bursary awards from the Arts Council of Ireland, Donegal County Council, the Arts Humanities Research Board, and his work is featured in public and private collections such as The Arts Council of Ireland and the Office of Public Works. Additionally, Beattie has worked at Fire Station Artists’ Studios as part of the dedicated management team since 2009.