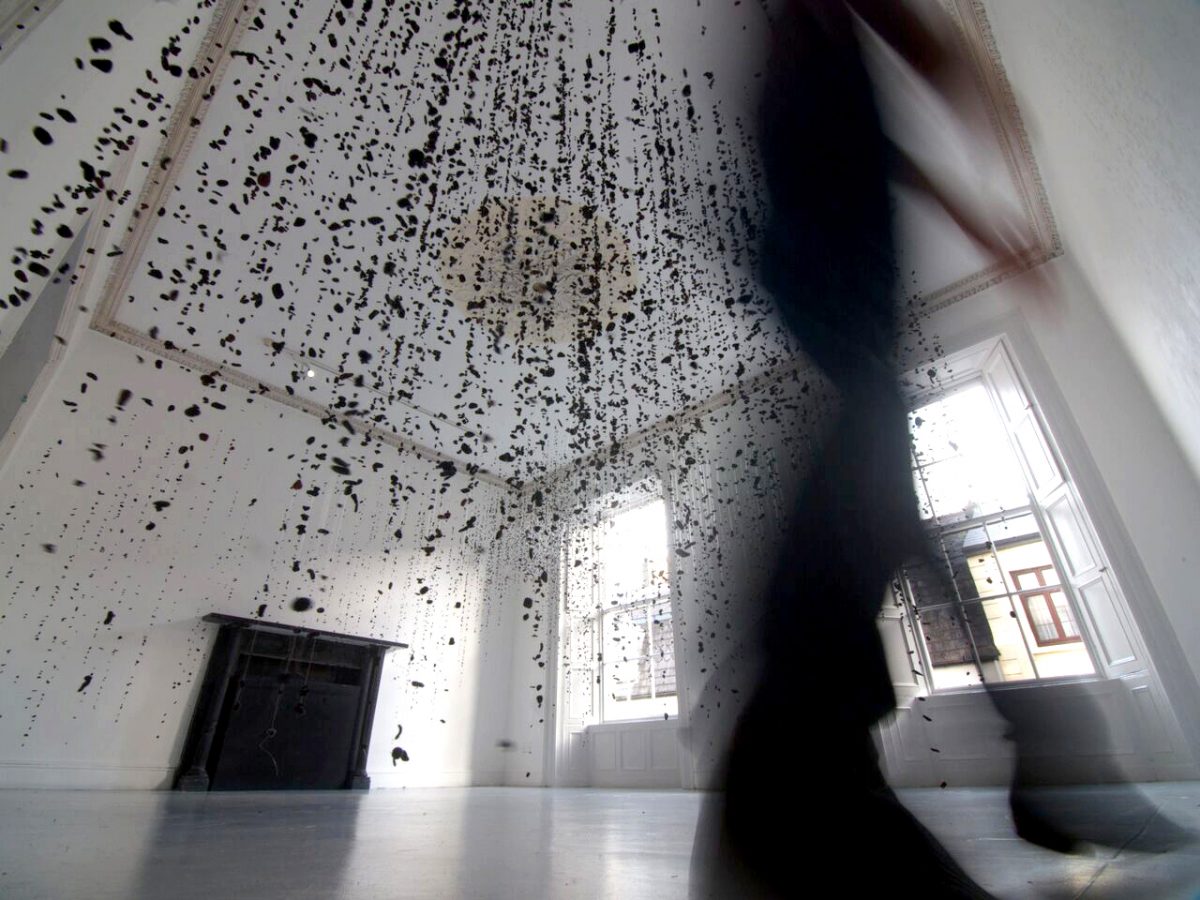 ‘Two apparently opposed but actually linked ideas seem to underlie Kidney’s work: the one and the many. That is how, on the one hand, we experience the world from the point of view of a distinct, individual consciousness, while on the other, each individual is actually a complex amalgam of myriad processes and systems – and a minute constituent of an immense, dynamic universe. Duality and opposites turn up throughout her work: movement and stillness, chance and design, particle and duration and stasis, repetition and change.’
Aidan Dunne, The Irish Times, 07.03.2017.

Metamurmuration is a monumental, site-responsive, spatial drawing composed of approximately 100,000 particles of suspended felt, trailing, pulsing and swarming through space. It awakens the audience’s kinaesthesia, encouraging an exploration of time and space. Pattern unfolds through the repetition of the deconstructed particle, opening out into an infinity of simultaneous micro and macrocosms.

One hundred and eighty people participated in making this piece of work. The mundane, repetitive labour recalled assembly lines and mass production but also craft and tradition.

Joanna Kidney was born in Dublin and currently lives in Co. Wicklow, Ireland. Encompassing drawing, painting and installation, her work explores ideas of temporality and the interrelationship between all living matter. Seeking to make some sense of life, it reflects on how complex yet tiny our lives are and how vast and infinite the universe is. Recent solo exhibitions include Galway ArtsCentre (2017), Mermaid Arts Centre, Co. Wicklow (2015), Royal Hibernian Academy, Dublin (2013) and The Drawing Project, Co. Dublin (2012). She has exhibited widely in group shows in Ireland, France, Germany and the USA. She is the recipient of an Arts Council Travel and Training Award, numerous Wicklow County Council Awards, an RHA Studio Award, a Ballinglen Arts Foundation Fellowship and a DIT Award of Excellence. Residencies include: Brigham Young University, Utah; Ballinglen Arts Foundation, Co. Mayo; The Guesthouse, Cork with the Tellurometer Project Collective. She is a founding member of Outpost Studios, Co. Wicklow. Her work is included in the collections of AIB, The Central Bank, OPW, UCD and Dept of Environment, Northern Ireland.