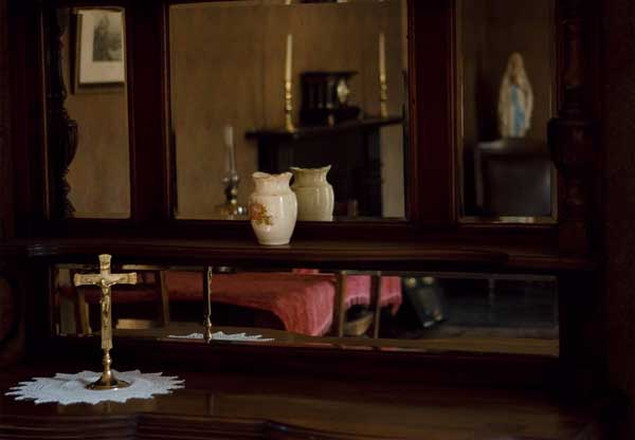 Part of the Ulster Bank Belfast Festival at Queen’s, this photographic exhibition by Jim McKeever is staged at the Arts & Disability Forum, on the Ground Floor of Cathedral Quarter Workspaces, at 109-113 Royal Avenue in Belfast.

This exhibition tells the story of John, who was placed in care with the Sisters of Nazareth at just one day old and didn’t leave the system until seventeen years later. Collaborating with John over two years, photographer Jim McKeever has created an intense narrative visualising places and objects that represent physical and mental pain.

On Tuesday 28 October, beginning at 2pm, Jim will give a talk about his work as part of the ADF’sConversations series. BSL communication support and audio description can be made available for both the preview and for the talk – please book this support well in advance by contacting leo@adf.ie or phoning 028 9023 9450.

The largest ever public inquiry into child abuse held in the UK began its first public hearings in Banbridge, Northern Ireland on 13 January 2014. The Historical Institutional Abuse Inquiry (HIA) is examining claims of abuse in children’s homes and the juvenile justice system over a 73-year period.

This enquiry was brought about by the pressure asserted by an organised group of survivors of that abuse who began campaigning for justice in 2009 after the release of the Ryan Report. The Ryan Report covered only institutions in the Republic of Ireland and left people feeling betrayed by the government of Northern Ireland.

This project was instigated in 2009, in response to a newspaper interview with a Northern Ireland victim of ‘Institutional Abuse’. On experiencing a further sense of personal abandonment and betrayal at the release of the Ryan Report, he felt compelled to speak out about his intimate experience.

John was placed in institutional care with the Sister’s of Nazareth at the age of one day. He left the care system seventeen years later. This photographic narrative of his childhood and teenage life was created over a two year period.

I worked with John to create a visualisation of significant places and objects, the memories of which still triggered deep feelings of physical and mental pain. Whilst I created all of the images based on John’s memories, it’s important to understand that, within the publication of this work, the final edit and text belong to John.

2) Further information on the artist

Jim Mc Keever is a social documentary photographer working in an exhibition / gallery context. He has an MFA and a BA in Photography from the University of Ulster and is also a co-founder of the Belfast Photo Factory, a non-profit artists’ collective created to provide an environment for emerging photographers. The group promotes photography through interaction with local and international arts communities.

His current work is based on applying documentary photography in a fine art context to create a contemporary visual narrative.