Jennifer Cunningham: All That Surrounds Us 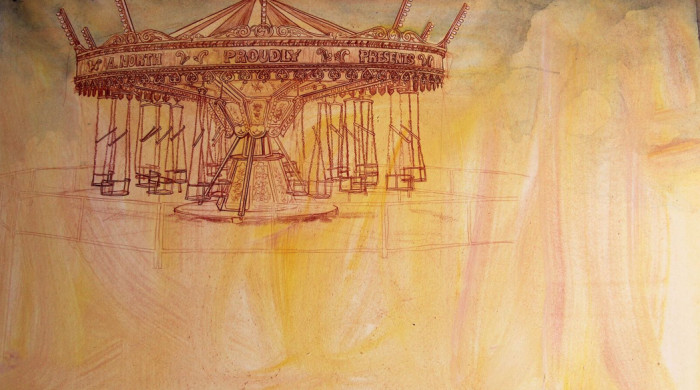 Jennifer Cunningham has developed a body of work investigating the ways in which modern realms of collective pleasure decay. Abandoned fairgrounds, overgrown glass houses, untended car parks, ghostly figures and derelict hotels all hint at recent economic struggles but also suggests the cycle of change and renewal in which places become spaces and vice versa. These are liminal spaces and therefore create uncanny compositions that alternate between feeling familiar and unfamiliar.

Cunningham is particularly interested in amusement parks that have suffered from, or succumbed to, neglect in recent years. The leisure ground is a heterotopic space, ref: Michel Foucault, suggesting a limitless world of adventures where people temporarily experience certain formulations of utopia. For many, these are nostalgic places; they spark off a range of associations and images, of feelings and senses. She is interested in that nostalgia and will produce a series of large- scale mixed-media drawings documenting these strange other worlds.

Cunningham’s practice is anchored between the parameters of self and becoming self-aware. It also deals with our surroundings peripheral zones and how familiar environments appear slightly unsettling or eerie to us. Central to her work is an ongoing exploration of identity, liminal space and personal subjectivity.

Jennifer Cunningham works with paint, printmaking, film digital media and drawing. She has won several awards for her work including the Taylor Art Award and the Thomas Dammann Travel Award. She also exhibits both nationally and internationally. Most recently she was awarded a digital media residency in Firestation studios, Dublin and a 6-month residency at the RHA Studios. She has also undertaken residencies in SIM Iceland, Cill Rialaig, the Tyrone Guthrie Centre and the Inishlacken Project.