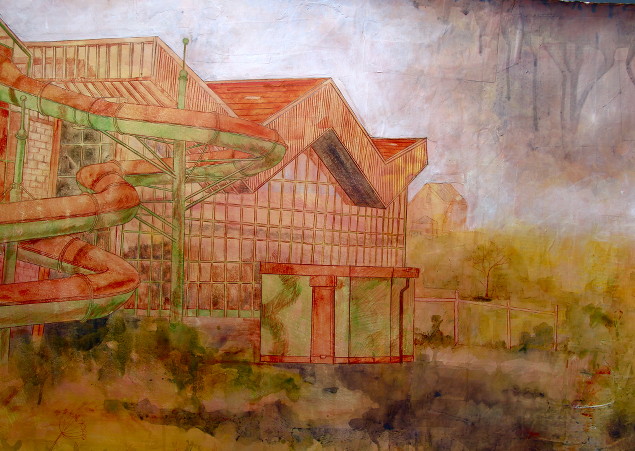 Jennifer Cunningham works with paint, printmaking, film digital media and drawing. A graduate of GMIT, she has won several awards for her work including the Taylor Art Award and the Thomas Dammann Travel Award. She has exhibited nationally and internationally. Most recently she was awarded an artist studio in the RHA School Dublin and at the Tyrone Guthrie Centre, Annamacarrig. She is a member of the Blackchurch Print Studio in Dublin.

Cunningham’s practice is anchored between the parameters of self and becoming self-aware. It also deals with our surroundings, peripheral zones and how familiar environments appear slightly unsettling or eerie to us. Central to her work is an ongoing exploration of identity, liminal space and personal subjectivity. Currently she is developing a body of work dealing with deserted seaside resort areas, and amusement parks that have suffered from or succumbed to neglect in recent years. The Leisure ground refers to Foucault’s Heterotopic spaces, suggesting a limitless world of adventures, where people temporarily experience certain formulations of utopia. The Carnival draws on a utopianism that is based in nostalgia and also an optimism for the future. However, by the time the 20th century drew to a close, the fun had flown elsewhere, leaving gulls to squawk their lament over a landscape of rickety piers, crumbling music hall theatres, rusting bandstands and rotting beach huts. Seaside resorts and amusement parks are now as dated as a saucy postcard. One passes boarded up shops and horrible bars, garish rock and candy floss stores, pound shops, burger bars and tanning centres. The prevailing atmosphere, which like salt, hangs heavy in the air is certainly one of hopelessness if not outright despair. When a park is closed down it feels quieter and darker than any other place, perhaps because it is always haunted by the times when it is brighter and louder. Our enduring fascination with ruins may derive from a longing not so much for what once was but for the futures they seem to promise. Jennifer is interested in documenting and highlighting these strange other worlds, as for many people they are nostalgic place.

A text by writer Phil Sun will accompany the exhibition.