Jan Pleitner: Water for the Tribe 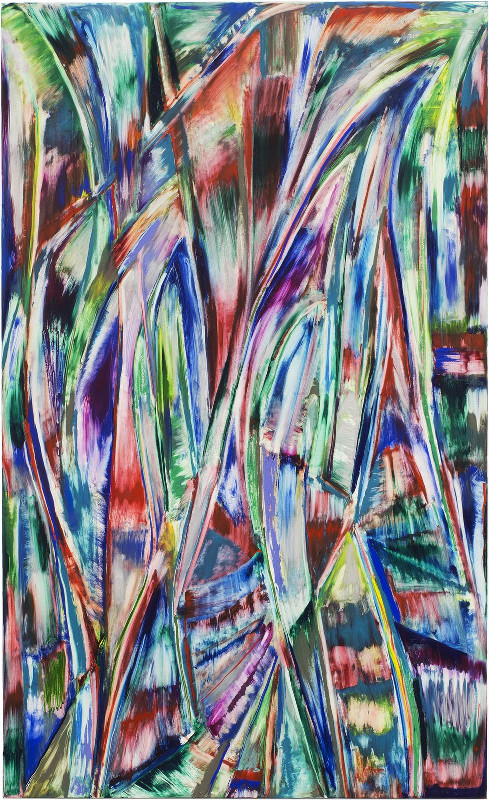 Deeply influenced by science fiction (in fact, the title for this exhibition references Frank Herbert’s Dune), the fast movement of Pleitner’s jolting lines reflect both his dynamic, durational approach to painting, often completing works in single, marathon sessions, but also the speed at which the world operates on a more minute level: the speed at which sound or light can travel, for instance, or the speed at which signals are sent and received by the brain. In a sense, Pleitner’s chaotic lines evoke the frantic pace at which we are capable of processing information. But on another level, his rich, luminous colours also hint towards something more mysterious, giving a physical manifestation to the invisible forces that continuously surround our existence, or lending a highly saturated colour palette to the unchartered abyss of the subconscious mind.

Jan Pleitner’s paintings are striking and expressive; an intense exploration of colour and energy. Characterised by bold lines and deep pigments that bleed into one another, the artist takes a highly tactile approach to painting, scraping through layers of paint as readily as he builds them up. Scratches, lines and patches of colour jostle for our attention sending the eye zig-zagging across the rich, mercurial surfaces.

In a recent artist interview, Pleitner articulated that his painting ‘is not about an anti-image, its more about the discovery of an unknown image’. Though wholly abstract, his painting does not imagine new worlds so much as illuminate what is hidden in the one we inhabit.

Born in Oldenburg, Pleitner is currently based in Düsseldorf, having graduated with an MA from the Kunstakademie Düsseldorf in 2010. Selected solo exhibitions include Nanzuka Underground, Tokyo (2015), Natalia Hug, Cologne; Ancient & Modern, London (both 2014); Förderpreis der Öffentlichen Versicherungen Oldenburg, Germany (2013) and Projekt Skagen 12, Denmark (2012). Pleitner’s work has previously been exhibited at Kerlin Gallery as part of the group exhibition Deep One Perfect Morning (2014).