James O’Connor: The Land Behind the Sea 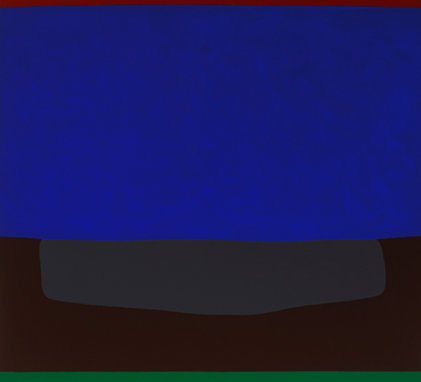 The Land Behind the Sea is German-based Irish artist James O’Connor’s first solo exhibition with Taylor Galleries since 2005. O’Connor returns time and again to an examination of landscapes and places that are known to him, and he reduces their forms to a resolute abstraction that sees them represented (or re-presented) as shapes that vacillate between strict and organic geometries of the artist’s invention. Linear forms are used to describe horizons and organic forms but these new paintings see him eschew the elongated vertical format he usually favours for almost-square landscape-oriented canvases that allow him to describe The Land Behind the Sea in broad swathes of contrasting colours that glow on the canvas.

James O’Connor was born in Dublin in 1945 and studied at the National College of Art and Design from 1973 to 1976. Following his studies he moved to Munich, where he still lives and works, and he has taught at both the National College of Art and Design, Dublin and the Volkshochschule München, Germany. He has exhibited his work in various group exhibitions in Ireland and internationally. Group shows include exhibitions with ev +a, Limerick; Lavit Gallery, Cork; B4A Gallery, New York; Galerie Médiart, Paris. He has also presented solo exhibitions at Marquardt Ausstellungen, Munich; Galerie Epikur, Wuppertal; Galerie A.O. Müller, Cologne; and Lad Lane Gallery, Dublin. James O’Connor’s work is included in numerous private collections as well as the public collections of Bank of Ireland, Gordon Lambert, Boyle Civic Collection in Roscommon, MGM Media Group and Stadtsparkasse in Munich.