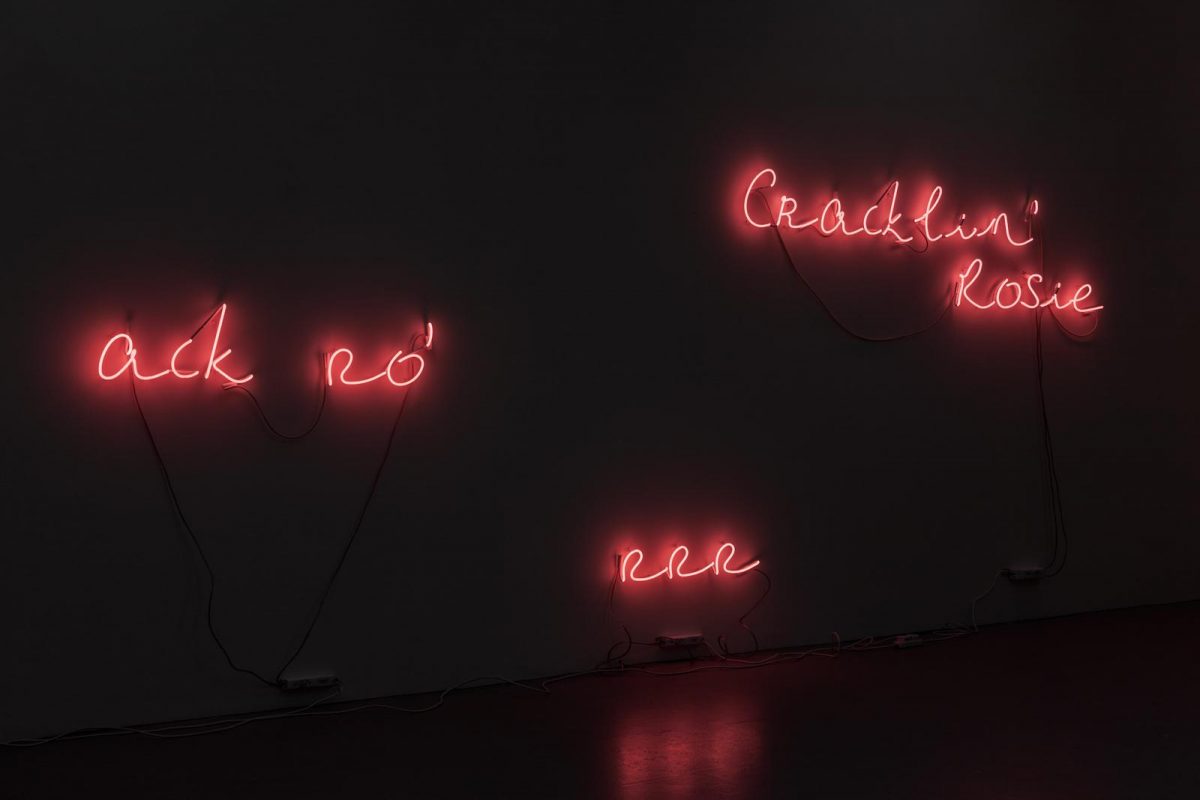 Kerlin Gallery is pleased to present Ack Ro’, an exhibition of new video, audio and neon by Jaki Irvine. An opening reception in the company of the artist will take place on Thursday 23 January.

Ack Ro’ contains an ambitious new 12-channel video piece, screened on monitors throughout the gallery space. They play an evocative, melodic but haunting composition: Louise Phelan’s mournful vocals blend over flute, piano and percussive elements from musicians Joe O’Farrell, Izumi Kimura and Sarah Grimes. Much like the soft layering of the track, the videos overlay im-ages of a vibrating cymbal, Phelan’s singing mouth, black and white piano keys coming in and out of focus, all while the curvilinear forms of pink neon hover in the middle-distance. These three synced audio-visual works are accompanied by nine further screens playing short fragments of film shot in Dublin and Mexico City, each with its own ‘wild’ soundtrack of composed elements and ambient sound, adding an unpredictable element to the playback of the footage.

Completing this immersive multimedia installation are 28 looping pink neons, all spelling out ana-grams derived from the words Cracklin’ Rosie, the title of a Neil Diamond song from 1970. Treat-ing language as endlessly reconfigurable, the neons present this text as modular sonic compo-nents: repeated, distorted, anagrammed or spliced into their most elemental forms. They simmer down, for instance, from the mournful “alone alone”, to the playful “alonio”, to finally to a single, primal and resonant “o”. What if almost the only words available are the lyrics from a song?, the installation asks us. What if everything you would want to articulate must conform to the words of this song?

These destabilised, shifting images and sounds deal with an emotionally-charged subject: the current epidemic of dementia and Alzheimers, which leave sufferers with a depleted sense of time. But if time and vision seem collapsed in Ack Ro’s nonlinear audio-visual arrangement, the piece also proposes that music might offer a temporary respite: using repetition, pace and rhythm to “smooth out the random”. Irvine’s warm and compelling video, audio and neon works offer, then, a loophole in the cruelty of disease – a means to navigate, to hold on, to briefly return, perhaps to mourn.

The exhibition Ack Ro’ will travel to Firstsite, Colchester, Spring, 2020.

A live musical performance of Ack Ro’ will take place at NCAD Gallery, Dublin on 9 January 2020.

With thanks to the Arts Council.