Jack B. Yeats: The Outsider 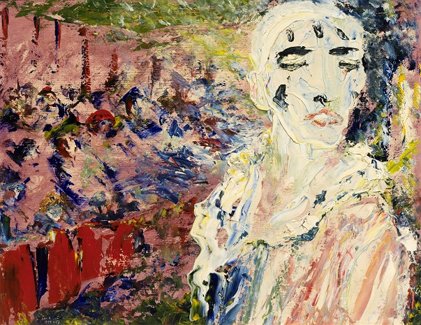 “…an important exhibition in an ideal location.” Aidan Dunne, The Irish Times.

“…exhibition perfectly captures the numerous contradictions – both creative and personal – that lie at the heart of his canvases…” Cristín Leach, The Sunday Times

This exciting exhibition brings together forty Jack B Yeats oils from a variety of public and private collections. Many of the works included have been rarely exhibited in Ireland in the past fifty years while others have never been shown publicly before.

Originally scheduled to close on 05 June, The Outsider will now have a staggered closing with all of the paintings on view until 09 June. Some of the galleries will then be closed for a new installation with a portion of the exhibition still open to the public until 12 June.

Curated by the internationally acclaimed artist, critic and theorist, Brian O’Doherty (aka Patrick Ireland), and Emer McGarry, Curator of The Niland Collection, the show will concentrate on the arc of Yeats artistic practice from his early realistic works to the wildly romantic and apocalyptic visions of his later years. The show will feature work spanning a sixty-year period, from an early Sligo scene completed in 1895, to one of Yeats final works, completed in 1956 the year before he died.

The show presents a great opportunity for audiences to see the two previously unseen paintings from the estate of the late author Graham Greene, which were recently sold by Christie’s of London. The works A Horseman Enters a Town at Night, 1948 and Man in a Room Thinking, 1947, were purchased by a private collector, who has very generously made them available to The Model for the duration of The Outsider.
A Horseman Enters a Town at Night, 1948 is a beautiful, dark painting, with flashes of vermillion and cadmium yellow. This previously unseen work is considered to be one of Yeats’ masterpieces and visitors to The Model will have a unique opportunity to see it.

The Model is delighted to bring some of Yeats greatest works back to his hometown of Sligo in a colourful and vibrant celebration of his life’s work.

The show is accompanied by a new publication with a major new critical text by Brian O’Doherty,as well as new texts by Dr. Tricia Cusack and Dr. Thomas McEvilley