Isabel Nolan: Bent Knees are a Give 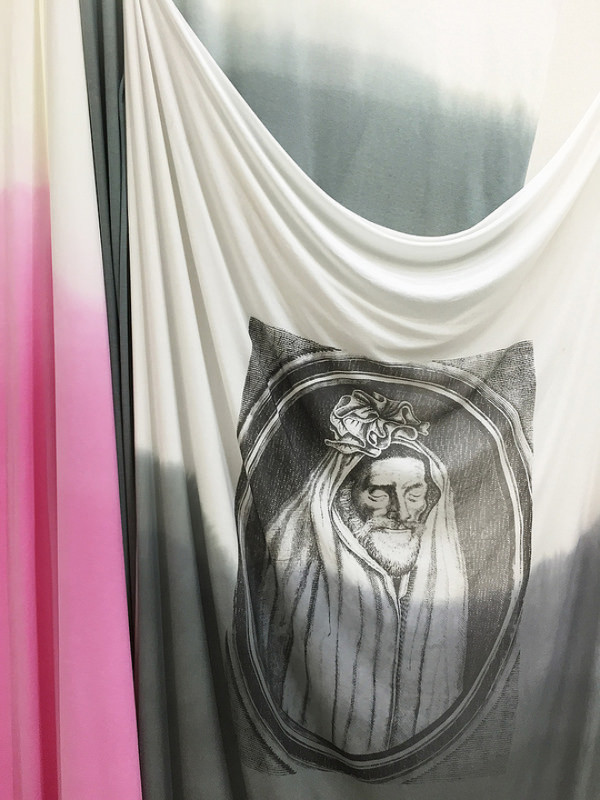 In this body of work, Isabel Nolan explores the anxieties implicit in the quest for power. Drawing upon eclectic research, Nolan’s practice incorporates sculpture, photography, painting and text-based work.

A central motif in the exhibition is the funerary sculpture of the poet and cleric John Donne (1572-1631). Based on a study made in the final weeks of Donne’s life,where he staged his own resurrection, he appears to be joyfully accepting of his imminent death. Donne’s unperturbed countenance is perhaps belied by the gentle bends in his knees which interrupt the otherwise inviolate, erect statue.

The gentle bends in Donne’s knees are echoed and amplified in a series of violently bent flag poles flanking the gallery space. Their banners hang unceremoniously in various states of distress and dishevelment. Nearby, a golden yellow lion offers its paw, punctured by a bronze thorn, awaiting assistance from some surrogate St. Jerome.

Bends reveal doubt, signal distress, admit failure – it is the bend that offers us a way into thinking about and against systems that rely on perfection.Pinpointing the weak points in these traditional motifs of power and imperial strength, Nolan exposes the ultimate ineffectuality of concrete objects in the face of time. Donne’s attempt to assert his future existence serves rather to crystallise the transience of his existence, ultimately revealing his vulnerability.