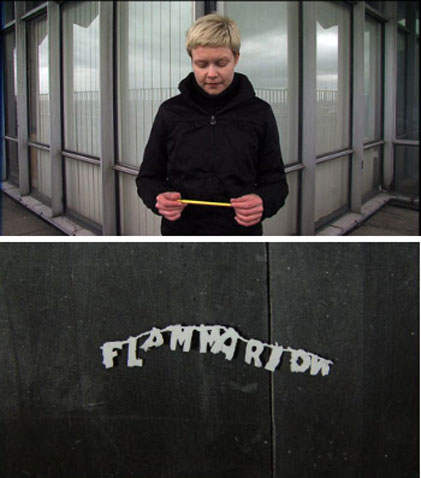 A shuttle bus will leave NCAD at 6.15pm to bring visitors to Farmleigh.

The exhibition will be launched at 7pm by Dr. Martin Mansergh, TD Minister of State at the Department of Finance with special responsibility for the Office of Public Works and the Arts.

The Ireland and Northern Ireland Pavilions at the 2009 Venice Biennale showcased the work of four distinct artistic practices. In March 2010, the NCAD Gallery and Farmleigh Gallery are pleased to bring the critically-acclaimed work to Irish audiences by hosting the exhibitions in Dublin.

Susan MacWilliam is a video and installation artist who has spent over ten years exploring the world of the paranormal. Through archive research, participation in experiments and interviews with leading parapsychologists, MacWilliam has developed an expansive body of work which mediates between the worlds of art and psychical research. Supported by Arts Council of Northern Ireland and British Council, Susan MacWilliam represented Northern Ireland at the 53rd Venice Biennale with a solo exhibition, REMOTE VIEWING which featured three video works. Eileen (2008) and Dermo Optics (2006) will be exhibited at Farmleigh from 12th March – 15th May 2010 and F-L-A-M-M-A-R-I-O-N (2009) will show at the NCAD gallery from 12th March – 10th April 2010. Susan MacWilliam is a lecturer in Fine Art at the National College of Art and Design, Dublin. She has exhibited in Ireland and internationally for over 15 years, including solo shows at Jack The Pelican Presents, New York and Gimpel Fils, London in 2008. Her video works (1998-2007) are housed in the Drama and Literature Section of the British Library’s Sound Archive. She has been artist in residence at PS1 Center for Contemporary Art, New York; CCA, Trinidad; Parapsychology Foundation, New York and aceart inc/University of Manitoba Archives, Winnipeg. MacWilliam will exhibit in the 8th International Photo-Triennial Esslingen 2010 and will have a solo show at aceart inc, Winnipeg in 2010 screening F-L-A-M-M-A-R-I-O-N.

Sarah Browne and Gareth Kennedy are two artists who, between them, manifest three distinct artistic practices. Browne and Kennedy each have distinct individual practices, but they have also developed a third practice as ‘Kennedy Browne’. At the Venice Biennale in 2009, all three practices were represented. At the centre of the work of Gareth Kennedy, Sarah Browne and Kennedy Browne is an engagement of / with people, as well as the explorations around identity, labour, globalization, economics, language, materiality and the construction of social space. The exhibition at Farmleigh features the solo projects of Sarah Browne and Gareth Kennedy; with 167, the collaborative work by Kennedy Browne showing at the NCAD gallery from 16th April – 15th May (with a separate launch event planned to take place on Thursday 15 April). Aspects of contemporary Ireland feature strongly in the works and this will be the first time that any of these projects have been exhibited on this island.

Sarah Browne’s recent exhibitions include Noughties But Nice: Twenty First Century Irish Art, Limerick City Gallery and touring (2009), Everyday, The Dock, Carrick-on-Shannon (2008), and commissions for Visualise Carlow and the National Sculpture Factory (both 2007). She has participated in residencies at Fiskars village, Finland (2010), Platform, Vaasa, Finland (2009), apexart, New York (2006) and Bolwick Arts, Norfolk (2004) and was awarded an Arts Council Artist Bursary in 2008 and 2009. Forthcoming exhibitions in 2010 include Warp and Weft, Raven Row, London, and Minimalism and Applied II, Daimler Contemporary, Berlin.

NCAD is particularly pleased to present the work of two of its graduates – Sarah Browne and Gareth Kennedy – alongside the work of a member of the college’s fine art staff – Susan MacWilliam – in the context of the developing, wide ranging programme of its new gallery space.

The OPW continues its support for Ireland at Venice and are delighted to host the exhibition at the Farmleigh Gallery to ensure that as many people as possible in Ireland get to see the work that drew such international acclaim for Artists from Ireland and Northern Ireland.

Ireland’s participation at the Venice Biennale is an initiative of Culture Ireland in partnership with the Arts Council.