IMMA Collection: Les Levine: Using the Camera as a Club 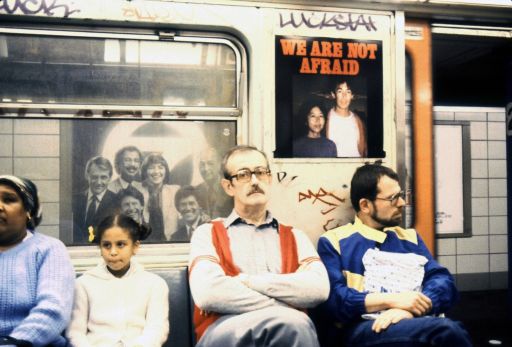 IMMA is pleased to present, for the first time, a group of unique cibachrome photographs by internationally renowned artist Les Levine.  The photographs are of key media billboard campaigns, which the artist staged during the 1980s and ‘90s, in New York, Los Angeles, London, Stuggart, Dortmund, Dublin and Aalst Belgium. These are shown in the context of other extensive suites of photographic and etched works from the IMMA Collection including TheTroubles: An Artist’s Document of Ulster, 1979, an 80 piece photographic work, and a series of etchings Using the Camera as a Club, 1979, from which this display takes its title. Other works are also included such as Group Shows Cut Up the Group, 1989.

Alongside these is an extensive collection on loan from Levine of his personal archive including 44 announcement cards that provide an index of Levine’s exhibitions as well as photographic documentation of early ‘environmental’ projects such as Slipcover, Disposables,(both 1966), The Museum of Mottart, 1972 and other material.

In 2004 Les Levine edited/curated Printed Project 04 in an issue entitled The Self Express. This presented a multi-faceted portrait of the artist conducted by 15 different interviewers. The title comes from the idea that all art is a form of self-expression. The Self Express interviews could be seen as mental portraits of the interviewers. These interviews can be viewed in the gallery and will be available online.

Born in Dublin in 1935 and based in New York since the early 1960s, Les Levine is regarded as the founder of Media Art. One of the first artists to work with video and television he coined the term media sculpture and is responsible for the terminology Software Art, Disposable Art and Camera Art. In his prolific career he has produced major series of works about the manifold effects and functions of the media and information systems.