I Smelled A Raw Recruit: The World War Films of Mary Reid Kelley and Patrick Kelley 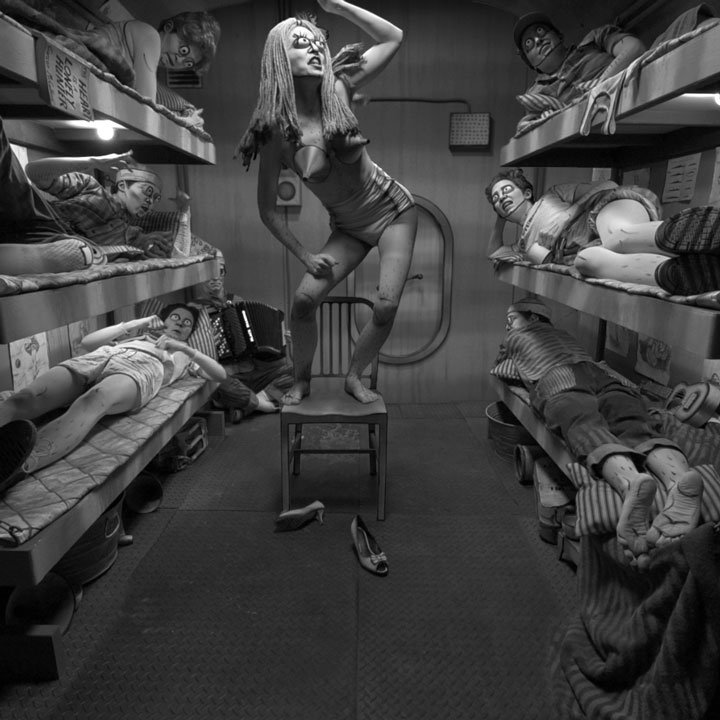 I Smelled A Raw Recruit: The World War Films of Mary Reid Kelley and Patrick Kelley brings together the artists’ most recent film, In the Body of the Sturgeon, which follows a doomed submarine crew on its final journey in the Pacific, and three earlier films set on the Western Front of World War I.

The reverberations of these global conflicts are energetically canvassed in the artists’ distinctive combination of animation, painting, performance, and distinctive wordplay-filled poetic scripts. Painted sculptural objects from the sets will accompany the videos, along with two lightbox portraits of characters from Sturgeon, which reveal the detailed painted surfaces of both performer and set. In a submarine, hospital, and a military brothel, Mary and Pat stage dilemmas of mortality, sex, and delusion, navigated by their characters in punning dialogue that traps them between tragic and comic meanings.

Mary Reid Kelley and Patrick Kelley’s work is held in many public collections including the Whitney Museum of American Art, New York; Hammer Museum Los Angeles; Yale University Art Gallery, New Haven; and The Zabludowicz Collection, London. Mary Reid Kelley has been awarded many significant awards including the MacArthur Fellowship and the Baloise Art Prize (2016) and the Guggenheim Memorial Fellowship (2014). The artists have exhibited extensively internationally and in 2017 presented We Are Ghosts, their first museum solo exhibition in the UK at Tate Liverpool, which travelled to the Baltimore Museum of Art in 2018.

Mary Reid Kelley and Patrick Kelley will be in conversation with Dr Dara Waldron, Lecturer in Critical and Contextual Studies at Limerick School of Art and Design, and Butler Gallery Director Anna O’Sullivan.