HOW TO SAY IT THE WAY IT IS! 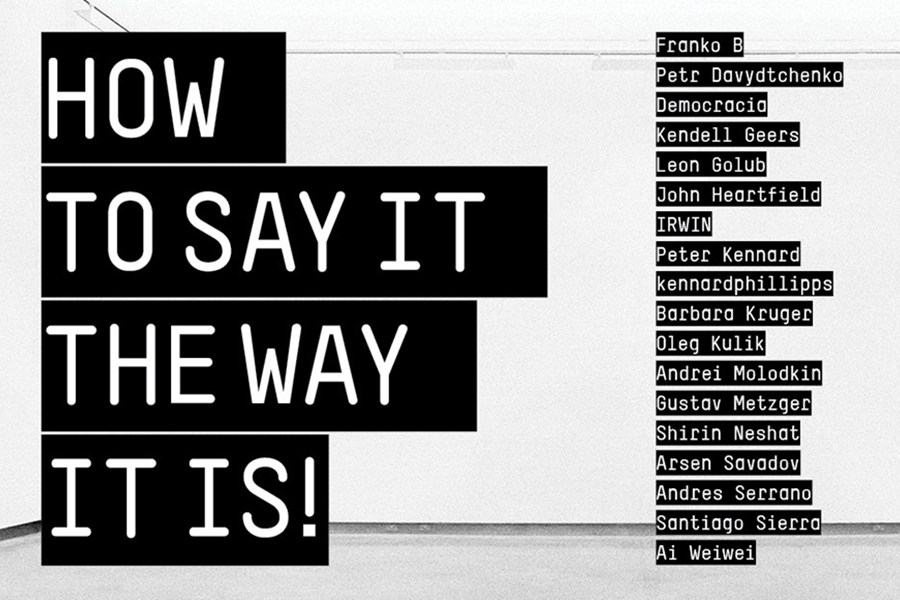 Selected works from the a/political collection, curated by Franko B.

“It’s not moral, it’s not about educating, it’s not about telling people what to believe, rather it’s about showing how the artists, as living beings, perceive it to be and the necessity to express and show it.” – Franko B

Curated by pioneering performance and visual artist Franko B, HOW TO SAY IT THE WAY IT IS! marks the first exhibition of selected works from the a/political collection, opening at Rua Red Gallery, South Dublin from the 7 October – 2 December 2017. The exhibition initiates the forthcoming programme of Rua Red’s new Director Maolíosa Boyle and the yearlong partnership with a/political.

At a time when history is eating itself, bloated off war and genocide, we look towards its nuclear death. HOW TO SAY IT THE WAY IT IS! provides an alternative narrative to the current political status quo – one of timeless definace, resistence and disorder – from some of the most influential socially and politically engaged contemporary artists.

Through a series of accompanying workshops, talks and events Franko B and invited guests will explore how we as people respond to power within domestic and political arenas.

‘This is a time of change for Rua Red as the organisation embarks on a new trajectory. The new programme and partnership with a/political commencing with the exhibition ‘HOW TO SAY IT THE WAY IT IS!’ will focus on the importance of politics, people and place. At a time of horrendous global uncertainty, unease and fear it is important that there is a space where contemporary artists have the freedom to express their opinions. Rua Red is that space. We are delighted to be working with Franko B and the incredible range of renowned international artists who inform this exhibition’ – Maolíosa Boyle, Director, Rua Red

Talk by Francesca Alfano Miglietti followed by a roundtable discussion with artists from the a/political collection, including Franko B, Kendell Geers, kennardphillips and Andrei Molodkin. Francesca Alfano Miglietti is a theoretician, curator and art critic. She is Professor of Contemporary Art at the Accademia di Belle Arti di Brera. The focus of her research is the contamination between life and art, and identity as a transformational element.

THE LANGUAGE OF CATASTROPHE

THE PERSONAL, THE POLITICAL AND THE POETIC; HOW TO SURVIVE YOUR FAMILY, THE CHURCH AND THE STATE AND MAKE THE WORK THAT MATTERS TO YOU

There will be a series of film screenings chosen by Franko B. For more information please check the website. This includes a special preview of Because of Love, a film about Franko B by Nathaniel Walters.

a/political is a not-for- profit organisation, collaborating with socio-political artists. a/political initiate, produce and tour large-scale projects world-wide. With offices based in London, a/political opened The Foundry in Maugbourguet as an experimental art space, producing ambitious projects outside the controls of the contemporary art market. In addition, a/political acquires artworks for permanent installation at The Foundry to compliment the collection currently located in London. Recent collaborations include ‘Torture’ with Andres Serrano, ‘FORWARD’ with Erik Bulatov, ‘ORDER’ with Democracia and ‘Black Flag’ with Santiago Sierra.

Franko B (b. Milan 1960) is a contemporary artist whose practice spans drawing, installation, performance and sculpture. Over the years he has built up a diverse and sizable body of work and has gained international acclaim for his contribution to contemporary art.