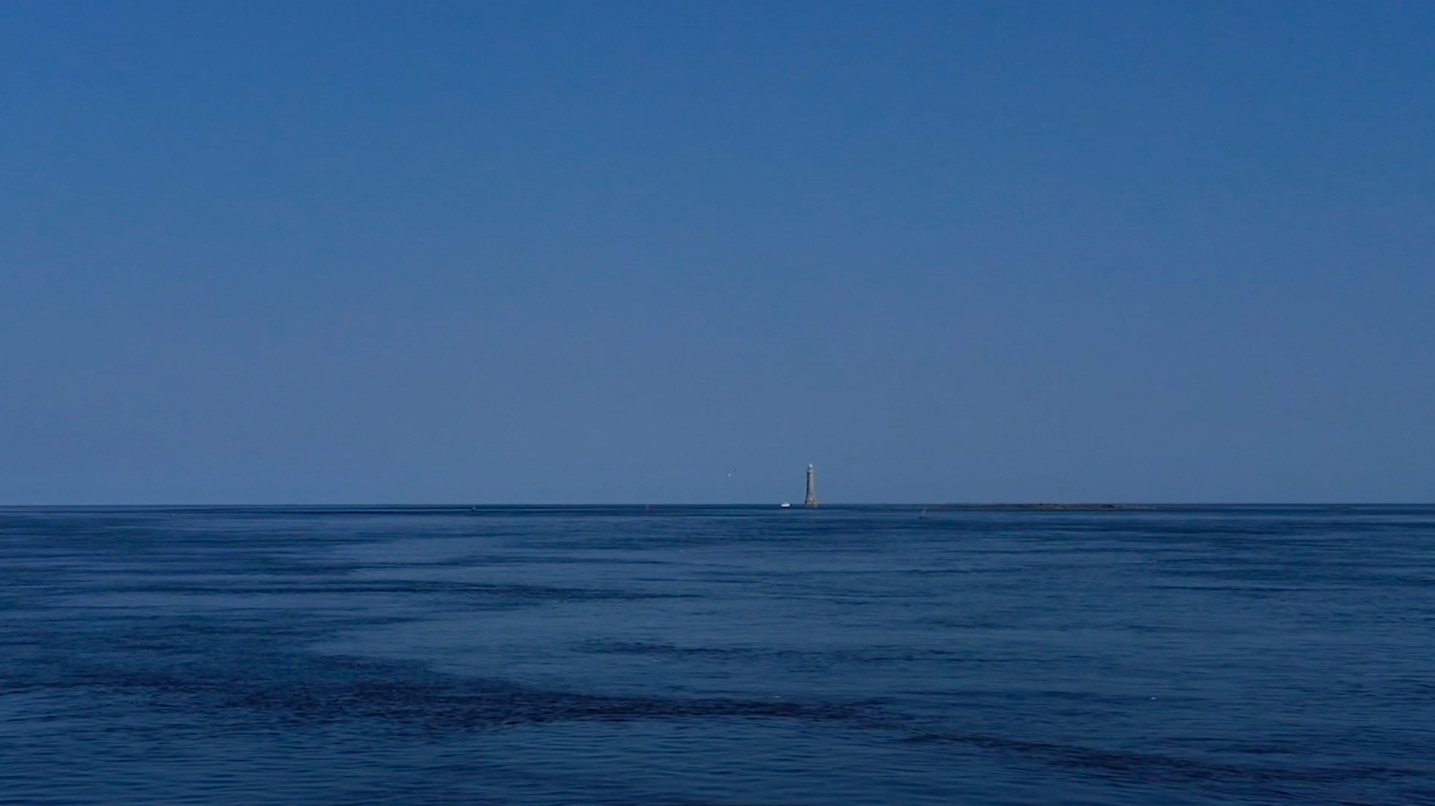 Looking out towards the sea border at this time of unrest in the wake of Brexit, visual artist Kate Nolan and composer Irene Buckley collaborated on video works.

Filmed in the contested space of Carlingford Lough, which is nestled between the Cooley and Mourne Mountains, it features local children from this undefined, invisible border space.

There is the consistent hum of the ferry, crossing from North to South and back again, within the blue of sea and sky. Spoken by the voice of one of the children is a list of contextualising statements and commitments of the Preamble to the 2020 Northern Ireland Protocol.

HAVING REGARD was commissioned by the Gallery of Photography Ireland to mark the Centenary of Partition in 2021. It was funded by the Arts Council Commission Award and Gallery of Photography Ireland. It marks the culmination of support for Kate Nolan’s LACUNA project which included touring exhibitions, talks and events, curated as part of the Gallery’s 5-year Reframing the Border project.

HAVING REGARD was made in the contested space of Carlingford Lough nestled between the Cooley & Mourne Mountains. A space where C.S. Lewis was inspired to write The Chronicles of Narnia, saying:

“I have seen landscapes … which, under a particular light, make me feel that at any moment a giant might raise his head over the next ridge.”

Produced between lockdowns and the push & pull of the United Kingdom’s first year fully exited from the European Union, this elemental landscape looks as though time has stood still. The cyclical nature of politics around the border, and the children caught in the middle were all to be considered in the making of these works.

Kate Nolan is a photographic artist and filmmaker continuously drawn to ‘in-between’ spaces in flux. Her practice is centered on sustained engagement and dialogues with communities in geographical locations where identity and territory are contested. Combining still and moving images with stories from participants, she highlights the contradictions and tenuous relationships between political borders and cultural identity.

Her long-term project LACUNA (2015-2022), was first exhibited at the Gallery of Photography Ireland in September 2017 and has been supported by the Art’s Council of Ireland. She has been the recipient of several residencies, recently in the Digital Hub Ireland, Headlands Centre for the Arts, California and Walkers Photographer in Residence, Ireland. Nolan’s work is held in public and private collections in Japan, USA, France, Portugal, Mexico, UK and Ireland.

Irene Buckley is an award-winning composer active across many music disciplines including choral, opera, orchestral, dance, theatre, film and electronics.

She has received commissions from Union Chapel London, Irish National Opera, the Cork French Film Festival, and the Dutch National Youth Orchestra, the latter as a result of winning the 14th International Young Composers’ Meeting in the Netherlands. Through the different disciplines in which she composes, Irene’s music has been performed by many prestigious ensembles including the BBC Singers and the RTÉ National Symphony Orchestra. Her film score for ‘The Swing’ was nominated for Best Original Music at the Festival International du Film d’Aubagne, France.

Irene holds a PhD in Composition and a BMus from University College Cork and an MA in Music Technology from Queen’s University Belfast. She attended Composition courses in the USA, Latvia and the Netherlands.