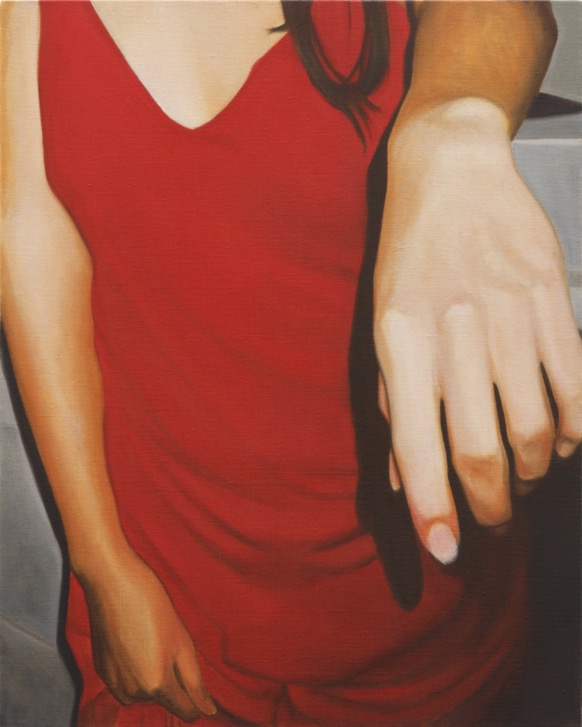 Kerlin Gallery is delighted to present an exhibition by four emerging Irish and international artists: Hannah Fitz, Áine McBride, Daniel Rios Rodriguez and Marcel Vidal. Each of these artists will be exhibiting at Kerlin Gallery for the first time. The exhibition will open with a reception and after-party on Thursday 6 July.

Hannah Fitz (b. 1989, Dublin) works predominantly with sculpture and video, making groups of objects that collectively build and break down basic formal identities. Her sculptures often represent familiar or domestic objects, rendered in such a way that reveals their artifice – rejecting sleekness or ‘finish’, they are instead articulated by curling lines and uncertain ‘wobbles’. Painted in different strains of the same murky yellow, as if bathed in the same light, the objects in this exhibition are given a uniformity that unsettles and excludes the viewer. They appear to co-exist in a universe that omits us, reflecting back a familiar yet uneasy version of the world: cigarette smoke curls upwards from an ashtray, suspended in space; a small horse either springs into or is frozen in action. These ambiguous sculptural forms appear suspended in time, acting more like a photograph or drawing than a sculpture.

Áine McBride (b. 1987, Co Donegal) graduated from NCAD in 2016. Her sculptures formally reference domestic, urban and commercial motifs and imagery. The works use photographs of day-to-day environment as their starting point, but undergo various processes of transformation to become fully abstracted sculptural forms. McBride works with a great sensitivity to the built environment, and recently completed a site-responsive exhibition in Trinity College’s Arts Block as part of the Douglas Hyde Gallery’s Gallery 3 programme. Her sculptures embrace open-endedness, deliberately assimilating aspects of their visual landscape and creating an ambiguity between where the sculpture ends and its context begins. She describes her work as ‘decidedly not grand, not sensational and at times almost banal’.

Daniel Rios Rodriguez (b. 1978, Killeen, Texas) makes semi-figurative paintings that combine images from nature with fantastical visions. The artist works to a small scale, building coarse layers of impasto upon homemade wooden panels in irregular shapes. Often these assemblages bear impromptu frames, built by the artist with frayed strips of rope, nails or copper wire, or introduce a collaged element with found organic detritus – stones, shells, ears of wheat. Rios Rodriguez’s paintings provide an abstracted version of the artist’s personal experiences, and filter the traditional genres of still life, landscape and memento mori through the cosmic lens of American folk art. Though European Modernism and Old Masters inform his work, the artist looks equally towards figures outside of the accepted ‘canon’ of western art history, like the visionary Texan painter Forrest Bess.

Marcel Vidal (b. 1986, Dublin) works with painting and sculpture, using manipulated or obscured imagery to induce an atmosphere of unease. Rendered with traditional techniques, Vidal’s paintings undermine their initial beauty by withholding information: faces are cropped out; flowers recoil away from us; unidentified persons are shielded from our gaze. Unnerving in their containment and exclusion, the paintings find a more disruptive counterpoint in Vidal’s sculptures – messy, extroverted assemblages that are constructed from wood and tactile fabrics painted black. Standing on wheels, these ominous forms are anthropomorphic in scale and house black and white watercolours attached the plinth with bitumen tape. Though formally convergent, these two stands of Vidal’s practice are in constant dialogue, elucidating a tension between reserve/expression, loudness/quietness, darkness/light.