Grace Schwindt: Through the Front Door 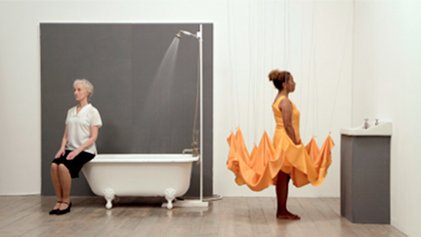 Born in 1979 in Germany, Grace Schwindt is normally based in London. She is currently participating in the Wiels artist-in-residence programme, Brussels. Schwindt works in both film and performance. Her artworks explore aspects of (German) history, emphasizing social relations and ensuing questions associated with the witnessing and narrating of historical events. In the process, Schwindt’s works scrutinize the idea of an inheritance of memory and its workings, e.g. the question as to whether the discussion of historical events such as the Second World War can ever be exhausted. Schwindt’s approach to these themes is a unique and fascinating blend of traditions such as Brechtian Epic theatre, tableau vivant and her own artistic sensibilities, which range from historical and sociological detail to the use and meanings of space, bodies, objects and costume.

The exhibition, which is curated by Susanne Stich, shows a selection of works, including the early films The Chair (2008)and Meeting Florchen Gordon (2008). Both these works explore aspects of Schwindt’s own family history in relation to the Nazi period, centering on fragmented narratives shared in casual conversation.

Schwindt’s latest work, Tenant (2012), is also on show. This new film centres on a scripted dialogue that takes as a starting point a story about Mrs. Schumacher who was the lodger of the artist’s grandfather in Berlin during the Second World War. She was a communist and helped Vladimir Lenin travel from Switzerland to Russia in 1917 after the February Revolution broke out. In the artist’s own words the film “describes the routines that take place in a family home, such as eating together, doing homework or bathing. These routines are embedded into a wider historical and social context and get repeatedly interrupted, for example, by a performer falling down stairs at the very moment she reached the top. The body in my work is turned into a fragile prop and in constant danger. I wish to empty institutionalized spaces of meaning. However, this doesn’t lead to neutrality, but becomes again loaded with gender, age, class and race… I generally use theatrical sets for video and performance works with minimal architectural elements and props to mark a location. I place bodies in these spaces, including my own, and use a tightly scripted choreography, in which every move relates to institutionalized systems that rely on exclusion and destruction. I investigate how social relations and understandings about oneself are formed in such systems. Interviews that I conduct with individuals often serve as a starting point for fictionalized dialogues that are then delivered by different performers. Whilst trying to represent a system, I continuously deconstruct it by using the same mechanisms that I apply to build it: bodies, movements, speech, furniture, architecture and costumes.”

The exhibition also includes the new performance Reading from a ribbon, which, in Schwindt’s own words explores the “desires and possibilities to create equality in social relations and difficulties of being heard.” Reading from a ribbon is based on a monologue, which takes the form of a letter. The text is presented on various levels: stitched onto a ribbon that is slowly unfolding, written onto a costume, and spoken by a performer. A tight choreography allows this text to unfold over a period of 30 minutes. The piece involves four performers: a 50-year old female dancer (Jia-Yu Corti), a 70-year-old man (James King), an 11-year old girl (Chloë Bradley) and the artist herself. These different roles also represent various possibilities of social relations implied in the text. The performers appear in isolation, but through the choreography they meet at certain points in which their mutual dependency is emphasized.

Schwindt graduated from the Slade School of Fine Art in 2009, and participated in the Associate Artists Programme at LUX in 2010. She has presented her work widely. Recent solo exhibitions include the White Columns Gallery, New York, South London Gallery, White Chapel Gallery and the Institute of Contemporary Arts, London. This year, Schwindt received the “Grant to Individual Artist” from the Foundation for Contemporary Arts for Performance Art, New York. She recently completed the new film Tenant, which was produced as part of Film London Artists Image Network in London. This film was premiered in a solo exhibition at Collective Gallery in Edinburgh, where she recently presented the performance Glass and Honey.

As another German person born in Nürnberg in the 1970s, I was fascinated with Grace Schwindt’s approach to German history, especially the underlying idea in many of her works of an inheritance of memory and its implications. Not having lived through a particular historical period, and learning about it second-hand, so to speak, as it is endlessly referred to, both in public and private contexts, brings with it questions and a sense of gaps.

Blending performance, history, theory and aspects of her own family’s story, Schwindt has developed a unique style of addressing such questions and gaps. While the context of Germany and the Second World War is unique in its historical scope and impact, confronting younger generations of Germans with the themes of guilt, responsibility and aftermath in ever-new contexts, there is also a more general, underlying motive in Schwindt’s work, i.e. the dimensions and possibilities of social equality in the face of systems, institutions and potential exclusion or destruction. Because of this, her work is of much interest to an international audience also. With regards to audiences in N-Ireland, the theme of not having physically lived through a vital part of recent history has yet another ring to it, as new generations emerge into adulthood who have little or no direct experience of “the Troubles”, and face their very own questions and gaps. – Susanne Stich

Susanne Stich, PhD is an artist, curator & lecturer based in the Northwest of Ireland. She is a member of the curatorial committee at VOID gallery, where she curated exhibitions by Christian Jankowski (2010) and Margaret Salmon (2011). She lectures part-time in the School of Art & Design at University of Ulster. Her visual work has been shown as part of film festivals (Frameline San Francisco; Galway Film Fleadh; Corona Cork Film Festival; Davis Feminist Film Festival, California & others), solo & group exhibitions (Artlink, Fort Dunree, Inishowen; Context Gallery, Derry; Catalyst Arts, Belfast & others) & academic conferences (JMP Symposium, Bristol; ISEA Inter-Society for the Electronic Arts, Belfast; SIEF Congress, Derry & others).