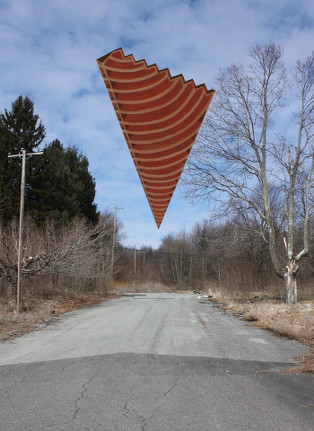 During the 60s Centralia, Pennsylvania, USA, began burning furiously as coal deposits deep under the town caught fire. The area began to spew hot toxic gases and sinkholes began to appear without warning. The area was declared unsafe in the 1980s and the residents were forced to move out.

Visiting Centralia in March of this year Gillian Lawler found a place of abandonment, a strange and eerie zone which exists between two worlds. Centralia is a townland which is no more; it has become a virtual construct in one’s mind, a place of memory and imagination.

Lawler’s new work looks at natural phenomena and its possible effects on the design and architecture of built structures. She explores human response to environmental crises and creates imaginary structures which play and hypothesize possible architectural solutions. These futuristic virtual structures hint at possible solutions, such as floating or elevated buildings, while only alluding to the cause of the disasters, in this regard, the viewer is confronted with wasteland and edifice, in an uneasy relationship of structural and psychological fluctuation and schism.

‘Smoke was hovering wispily off the ground, and just behind it, great volumes of smoke were billowing from the earth over a large area. I walked over and found myself on the lip of a vast cauldron, perhaps an acre in extent, which was emitting thick, cloud like, pure white smoke—the kind of smoke you get from burning tires or old blankets. It was impossible to tell how deep the hole was. The ground felt warm and was loosely covered in a fine ash’. Bill Bryson, A Walk in the Woods’ (1998)