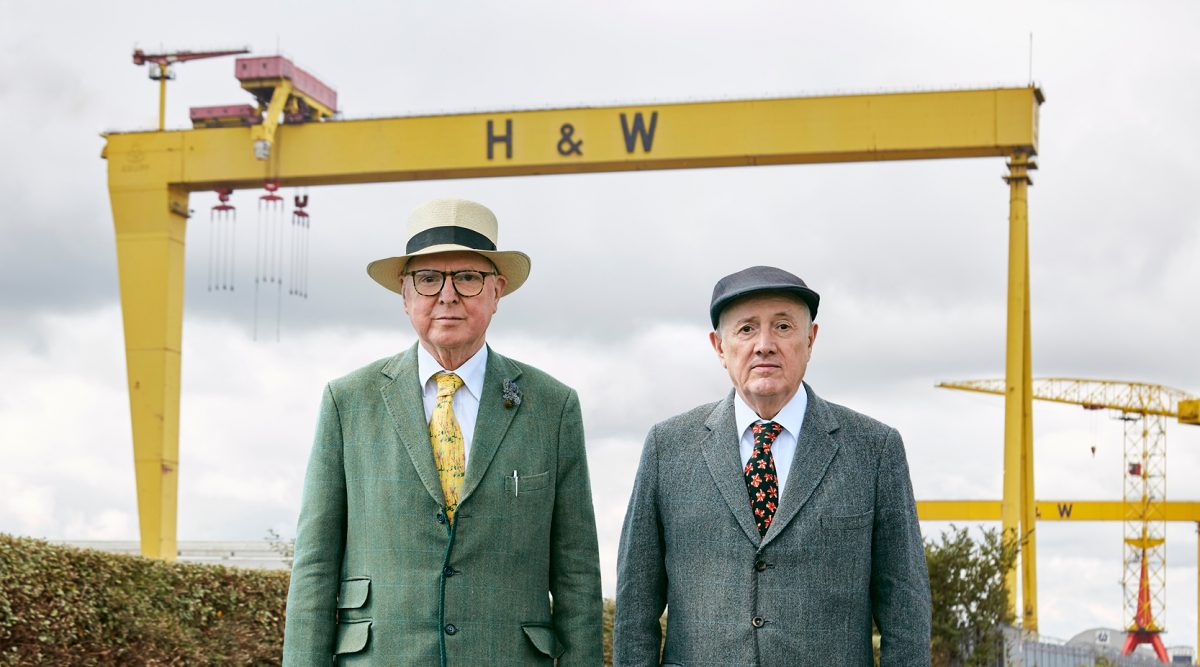 SCAPEGOATING PICTURES for Belfast is the first significant presentation of work by Gilbert and George in Ireland since their attention-grabbing exhibition at Ormeau Baths Gallery in 1999.

Occupying all three of our gallery spaces, this large-scale exhibition marks the 50th anniversary of Gilbert and George’s collaborative practice, which began when they met as students at St. Martin’s School of Art, London in 1967. Since this time, they have created work collaboratively, declaring themselves to be “two people, one artist”.

From early on, Gilbert and George (born 1943 & 1942 respectively) distinguished little between their lives and their art, presenting themselves as ‘living sculptures’. Their assertion that artist and artwork were one – or rather than an artist might be an artwork – heralded a radical expansion of the understanding of sculpture from an object-based practice to one that incorporates the entirety of lived experience.

On the one hand, Gilbert and George’s work is profoundly intimate, often incorporating images of their own bodies – sometimes nude or represented via bodily fluids – and draws intensely on their own lives. On the other hand, they present an expansive, outward-looking view of the society we live in and a meditation on the complexity of human experience. This relation of the personal to the wider society has been no better exemplified than in their ongoing concentration on the East End of London, which has been both their home and their muse for decades. The artists have described their local area as the world in microcosm, stating, “nothing happens in the world that doesn’t happen in the East End”. Constituting both a form of self-portraiture and a portrait of the wider humanity, their images drawn from life in this part of London speak to themes of religion, sexuality, race, identity and belonging, with their philosophy ‘Art for All’ rooted firmly in the social fabric of this urban landscape.

The body of work presented in this exhibition – Gilbert and George’s SCAPEGOATING PICTURES – draws upon the same geographical source and fundamental themes; unflinchingly describing the volatile, tense, accelerated and mysterious reality of our increasingly technological, multi-faith and multi-cultural world. It is a world in which paranoia, fundamentalism, surveillance, religion, accusation and victimhood become moral shades of the city’s temper. Gilbert & George take their place in these SCAPEGOATING PICTURES as shattered and spirit-like forms – at times masked, at times as grotesquely capering skeletons, at times dead-eyed and impassive.

Dominating the SCAPEGOATING PICTURES, becoming almost the imagistic signature of this new group of pictures, are images of the sinister bomb shaped canisters used to contain nitrous oxide, also known as ‘whippets’ and ‘hippy crack’ — recreationally inhaled to induce euphoria, hallucinations and uncontrollable laughter. Gathered by the artists on their early morning walks from the side streets and back alleys that surround their home, the presence of these canisters, mimicking that of ‘bombs’ pervades the mood of the SCAPEGOATING PICTURES to infer terrorism, warfare and a stark industrial brutality.

As always, Gilbert and George challenge our deep-seated preconceptions by acting as a mirror to society; provoking us to examine the world we live in – and our complicity in its chaos – in greater detail.