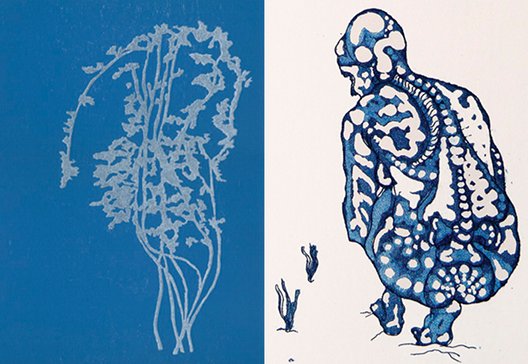 Gerard Cox, having worked in wood as a sculpture began making woodblock prints in 1999. According to Cox “The inspiration for this exhibition came from my travels in Mediterranean countries. Initially what struck me was the intensity and clarity of the light when outdoors. But on going inside one is almost in darkness. Seeing indoors can often be difficult even when the vision adjusts. Sometimes I think its like walking in a dream. Looking back outside the view is often in sharp focus and radiating light. I set out to capture this experience in some of the prints.” Gerard Cox graduated from the National College of Art and Design, Dublin and went to Dusseldorf Art Academy for a Post Graduate Sculpture year. He has exhibited in solo and group exhibitions in Ireland, England, Germany, Korea and Japan.

Ciaran Tuite attended DIT (Mountjoy Sq.) Fine Art degree course, followed by a year under the stewardship of master printmaker Anthony Lyttle at NCAD, where he further developed his printmaking skills. He is a member of Graphic Studio Dublin since 2005. Tuite’s etchings explore line and form… what is contained and the tensions, which are created, to reveal the hidden energies and flows within the human form.

This exhibition is included in the ‘Bealtaine’ Festival 2011. Gerard Cox will do a demonstration on woodblock printmaking and Ciaran Tuite, who has created a print on the Bealtaine’s 2011 theme: ‘Push the boat out, whatever the sea’ taken from the poem ‘At Eighty’ by Edwin Morgan, OBE, will give a talk on Thursday 5th may from 3pm – 4pm. Booking for the demo and talk is essential – t: +353 1 6798021 | e: gallery@graphicstudiodublin.com

Exhibition continues until 28 May 2011