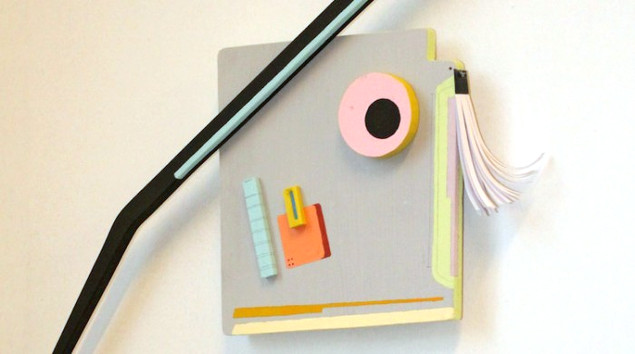 Making use of alternating mediums and techniques such as sculpture, painting, and drawing, Gerard Carson’s works are composed of dynamic, hard-edged forms and striking colour tones that echo characteristics of electronic technology and minimalist aesthetics. His works are often comprised of multiple objects, of varying scales and volume that are arranged within modular assemblages, whereby each individual object expresses a playful cooperation.

Features of communication are a recurring theme that can be perceived in his work; antenna-like objects reach out at oblique angles and sculptures are cabled together suggesting transference of information and data linkage. By incorporating these characteristics of electronic components Carson is interested in drawing a parallel between objects of utility and fine art, whereby the component’s functional appearance is wryly skewed, becoming an abstract gadget.

Carson states that he often follows an intuitive process when constructing his works, but within an aesthetic consisting of repeated motifs and forms. These details of his practice are sourced via his research into numerous areas of fine art and design, encompassing fields of Modern/Post- modern architecture and product design. Aspects of Carson’s work bring to mind the dynamic compositions of Russian Suprematism and American Minimalism, subjects which is strongly influence his own practice.

Gerard Carson, born 1987, is a mixed media visual artist from Belfast, Northern Ireland. He graduated from the University of Ulster School of Art & Design in 2010, specializing in mixed media sculptural assemblages. In 2011 he was awarded the University’s Artist in Residence position.

Carson’s works have been exhibited previously in exhibitions in the Republic of Ireland, Northern Ireland, the UK, Germany, and France. Gerard is a member of LOFT Studios and an associate member of Array Studios, both based in Belfast. He is currently studying an MA in fine art at the Chelsea School of Art & Design in London.