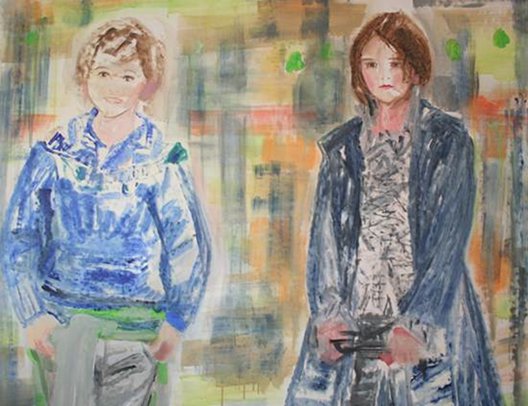 ‘I’m young as morning and fresh as dew’ – Maya Angelou

Forever Girls and Boys projects a world inhabited by children, ranging from middle childhood to pre-teen. Browne has previously appropriated imagery of young females from fashion magazines or imagery of dolls; for this series, the source of choice is childrenswear catalogues or children’s lifestyle magazines. Particular poses and expressions, however slight, have drawn her to adapt selected figures as a vehicle for illustrating the traits, attitudes and essential spirit they project, which are perhaps universally inherent in all children. Although boys and girls feature, there is a blurring of lines between genders. Traditional differentiation becomes irrelevant in this inquiry into what is common to all children when they are young, carefree and part of the one group.

To enter Forever Girls and Boys is to enter a world where roles become partially reversed; although we view the images, we in turn are also viewed by the figures present in them. The children appear interrupted, stumbled upon mid activity; but, unlike the proverbial deer caught in headlights, this group is neither startled nor timid. An aura of confidence and self-assurance reigns, sometimes beyond their years. They stand at ease in their world unperturbed by adults, brimming with the possibilities of youth. Although almost all eyes lock steadily with ours, expressions remain contained and unreadable. It is this ambiguity which commands our attention and enlists our engagement. Sketched against inconclusive backgrounds void of any narrative, the children remain anonymous, yet this is of no import. The figures act as a vessel through which the spirit of the universal child is brought forth onto the canvas.

Browne paints intuitively and briskly, with a thin paint and a fluid brushstroke, allowing the images to emerge themselves. On occasion, the limbs fade out, heightening the other worldliness of this ‘kids world’; they appear to hover, not grounded in our world but existing in a place of their own. Poised in their timeless world, the children who bear an almost adult-like confidence confront us with the child forever present within ourselves.